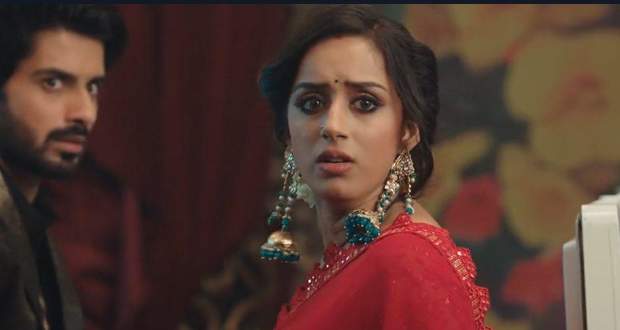 Today's Yeh Hai Chahatein 29th April 2022 episode starts with Roohi telling Revati that she should scold Dev more as he had tried to kill her.

However, Preesha comes there just in time and lies that Dev had locked Roohi in the bathroom and filled it with smoke.

Further, Roohi and Saaransh perform while Preesha goes to the kitchen to check up on snacks.

Meanwhile, Alia accidentally splashes some drink on Revati and apologizes while Revati says that it's okay and goes to clean herself.

Inside the kitchen, Preesha sees the servant collecting the garbage for throwing it out and stops him thinking that she will dispose of the body with the garbage at night.

Just then, Preesha looks back and gets shocked to see Revati standing there.

Later, Preesha informs Rudraksh of the incident in the kitchen and he argues with her.

Roohi goes to the center of the stage and tells the couples to play a game in which they will have to dance on a piece of paper that will be folded after each round and the last pair standing will win.

Rudraksh refuses to dance with Preesha initially but agrees after Preesha says that Roohi will be upset if he declines.

Rudraksh loses the keys to the freezer

At the end of the game, Preesha and Rudraksh win while Rudraksh takes back his coat from the waiter and finds that the key for the freezer is missing.

They rush to check the freezer while Revati thinks of leaving the party after saying goodbye to Rudraksh and Preesha.

In the basement, Rudraksh and Preesha get shocked to see the freezer open with Dev's head hanging out of the polythene bag when they hear Revati's voice.

Sharda rescues #RuSha from getting exposed

Just then, Revati comes there and tells them that she is there to say goodbye to them as she is returning home.

Preesha and Rudraksh panic when suddenly Sharda comes with packets of frozen snacks and puts them on top of Dev's face to cover it.

Revati leaves while Sharda scolds Rudraksh and Preesha for hiding such a big thing and tells them to come downstairs after locking the freezer and the basement.

Sharda gives them the key to the freezer and leaves.

Revati's suspicion of the Khurana family

Elsewhere, Revati feels that something was off at the party and calls the police ordering them to check all the routes going to Goa and confirm if Dev went there or not.

Later, at the end of the party, Sharda scolds Preesha and Rudraksh saying that she knew something was wrong since the time they brought the freezer.