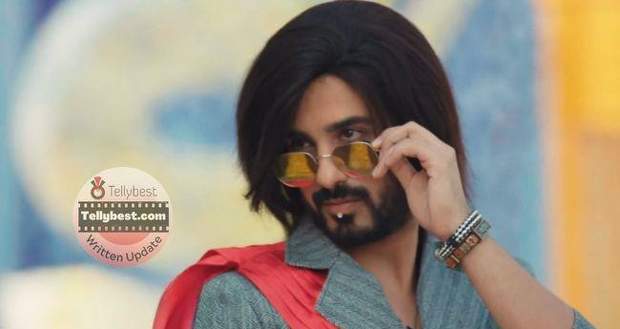 Today's Yeh Hai Chahatein 29th December 2022 episode starts with Nayantara entering Samrat's room and getting shocked to see him half-naked on the bed.

The rose from Samrat's mouth falls as they both ask what they are doing in each other's room.

Samrat is quick to say that it is his room and he can do whatever he wants.

Nayantara, however, says it is her room but Samrat shows her the card key.

Seeing it, Nayantara gets quiet and apologizes to Samrat while he corners her.

Nayantara says that the keys must have got swapped with his Tuesday girl and tries to leave.

However, Samrat tells Nayantara that she ruined everything and now she has to pay for her mistake.

He says that his Tuesday girl was coming to fulfill his needs but now Nayantara will do it.

He pouts his lips as he comes close to kissing her but Nayantara pushes him off and slaps him.

She gets angry and threatens Samrat of calling the cops since he was trying to harass her.

Samrat also gets heated up and tells Nayantara that he can call the cops as well as she invaded his privacy.

He gets mad and rambles on saying, she is just not leaving him wherever he goes.

Meanwhile, Paati and Chintu arrive at the wedding venue where Paati excitedly asks Malti where her rockstar Samrat is.

Just then, Nayan comes there and Paati asks her the same question but Nayantara angrily says she doesn't even want to hear that disgusting's man name again.

On the other hand, Samrat tells Mohit that he wants to get a restraining order against the spectacled girl but Mohit calms him down, reminding him that if he involves the police, Revthi might know where they are.

Mohit asks him to ignore Nayantara while Aliya comes and asks Samrat not to drink up since he has to perform tomorrow at Kiara's wedding.

Later, Ishani is hurrying into her room and collides with Mohit.

Her Haldi-stained hands make Mohit's white sherwani dirty as he saves her from falling.

The glint and smile on Mohit's face increase when Ishani jokes that his sherwani now looks like a designer one.

She then whispers to him that when Ishani makes an impression on someone (referring to her Haldi hands-on Mohit's sherwani), she makes it on their heart.

The next day, Mohit is sleeping without removing the sherwani while Aliya comes to wake him up.

She questions him why he didn't remove his sherwani and he lies, saying he was tired.

He then goes to wake up Samrat as it is almost afternoon and reminds him of his performance.

Meanwhile, Ishani dances happily in front of Nayantara, saying she is so excited to dance in Samrat's group.

Ishaani reaches the practice spot where Mohit gets mesmerized to see her look so beautiful.

Mohit then instructs the music player to play Samrat's recorded song as he will be lip-syncing the song and nobody should know.