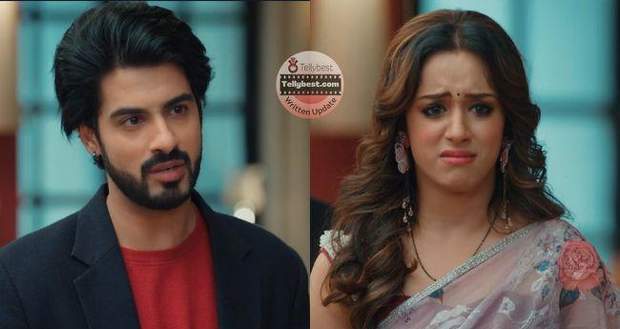 He asks Digvijay to give him the file that contains the power of attorney and Armaan tears those papers.

He tells all the Khuranas to leave the house immediately.

In Preesha’s room, Preesha packs her clothes and Rudra enters and sees her gathering her clothes.

Rudra’s eyes fill with water as he watches Preesha, she notices him and asks what he wants.

Rudra says that he is left with no words to say to Preesha anymore and that he has put Preesha in the same situation again and again.

Preesha tells him that it’s not his fault, it’s just the game that life plays with people who love and she asks why is it so difficult to be with the person you love.

Rudra tells her that love is easily done but maintaining it is difficult, always there are clashes between the brain and heart.

In those clashes between the heart and the brain, Rudra let his heart win.

Saransh enters her room and tells Rudra that he told him prior only that there must be a reason that Preesha is married to Armaan but Rudra didn’t heed it any importance.

Rudra walks back and tells that he only believed what he saw with his eyes.

Rudra holds Preesha’s hands and begs for her forgiveness.

However, Preesha takes her hands back and says that it doesn’t matter anymore as he is still married to Pihu.

Rudra tells her that he did not marry Pihu and swears it on Saaransh’s head that he is speaking the truth.

Preesha tells Saransh to leave her room and asks Rudra what he plans on doing with his unborn child that Pihu bears.

Rudra tells Preesha that it is not his child but Vidyut's.

Preesha tells Rudra that she went to the courthouse to talk to him but she found that Pihu was pregnant, and Pihu told her that it is Rudra’s child.

Rudra gets angry hearing this and tells Preesha that this is not the truth and that Pihu herself will tell the truth.

Rudra storms Pihu’s room and questions her why she lied to Preesha about the child.

Pihu admits that she lied but she did it just to take revenge on Preesha.

She says that even with all the plans and plots both Armaan and Pihu could not keep RuSha apart.

Pihu apologizes to Preesha and tells them that they should come and live in her house.

Digvijay hears this and says that they can't stay at his house as Armaan is his family and Rudra is not.

Rudra shouts at Digvijay saying that their blood is tainted and what else is excepted of them and tells Digvijay to have a little courtesy.

Rudra says that he is going with his love and is not empty-handed.

© Copyright tellybest.com, 2022, 2023. All Rights Reserved. Unauthorized use and/or duplication of any material from tellybest.com without written permission is strictly prohibited.
Cached Saved on: Wednesday 25th of January 2023 11:30:51 AMCached Disp on: Thursday 2nd of February 2023 07:57:09 PM