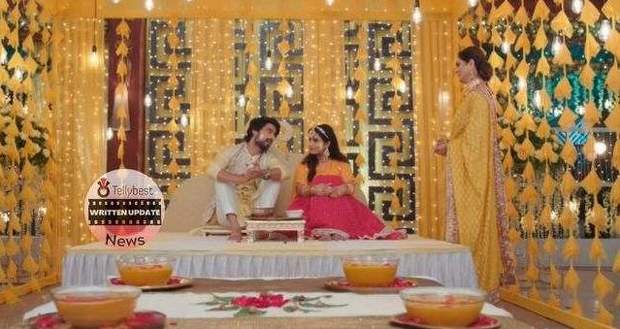 Today's Yeh Hai Chahatein 29th September 2022 episode starts with Rudra reminding Preesha about several moments in the past that they spent taking shower together.

Preesha is mesmerised by Rudra’s nearness while he closes the distance between them while the water drenches them.

Preesha gets overwhelmed and tells him that she will have to go but she slips and lands back in Rudra’s arms.

After a while, Rudra tells her to not blame him later and carries Preesha in his arms to take her out.

Meanwhile, the doctor tells Arman that his ankle is only sprained and asks him to give rest to his foot and use the walker to walk.

Afterward, Arman takes the walker and goes in search of Preesha.

Meanwhile, Preesha feels nervous being in Rudra's arms and tells him to put her down.

In the meantime, Roohi is hoping that Arman does not see Preesha and Rudra together but as Arman comes into Rudra’s room, he finds Preesha standing alone in a wet dress and asks her why is she still standing in wet dress.

Preesha is thankful that she timely hid Rudra in the bathroom and tells Arman that she wrongfully opened the shower.

In the meantime, Pihu comes with a towel for Preesha while Preesha asks Arman what happened to his foot.

Pihu tells Preesha to change out of wet clothes but Preesha says she will change at home.

During the drive, Preesha recalls moments with Rudra in the shower and wonders why his touch felt inviting to her and why she wants to be around him.

Seeing Preesha in thoughts, Armaan wants to know what Preesha is thinking and resolves to keep watch on Preesha during the Mehndi ceremony.

The next day, Rudra comes down with Vanshika and soon the dance begins and everyone joins in.

Preesha looks at Vanshika with jealousy while Sharda asks Preesha to apply Mehndi on her hand.

Meanwhile, Rudra tries to make Preesha jealous by romancing Vanshika and later teases Preesha for writing his initials on her hand.

Rudra clicks a photo of his initial 'R' and shows it to Armaan, telling him that Preesha still considers Rudra as her husband.

Arman gets instigated and adds a lot of chili powder to Rudra’s food to get back at him.

However, Arman is shocked to see Rudra and Vanshika unaffected by the chill powder.

Later, Arman becomes a victim of Saransh's joke when Saransh adds 'Jamalgota' to his food to teach him a lesson.

© Copyright tellybest.com, 2022, 2023. All Rights Reserved. Unauthorized use and/or duplication of any material from tellybest.com without written permission is strictly prohibited.
Cached Saved on: Monday 21st of November 2022 12:47:09 AMCached Disp on: Wednesday 7th of December 2022 11:42:56 AM