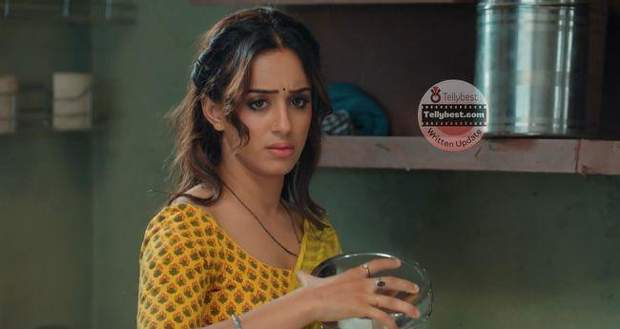 Armaan threatens Pihu and tells her that she has to do anything he says.

Pihu stands up to him and tells him that she will do whatever she feels is correct.

Armaan tells her that if she doesn’t do as he says he will be forced to do the unspeakable to her.

Digvijay butts in and tries to stop both of them, Armaan threatens her again and says that he will do anything if he has to and both of them go away.

Digvijay wonders what happened to Armaan and states that he has become really toxic.

On the other hand, Preesha asks Rudra what is his new job.

Rudra tells her the truth and states that life has shown him his value.

Preesha tells him that he hasn’t lost his value, he is still the same Rudraksh Khurana the famous rock star.

She further tells him that now the time is not on their side but soon the tides will turn and this dark period of life will come to an end.

Rudra tells her that she is right and he hugs her and states that as long as they are together they will always win.

The next morning, Preesha surprises him with a visit to the bar.

Delighted to see her he asks what is she doing there and she replies that today she wants to hear him without the crowd.

Rudra sings a romantic song specially dedicated to Preesha but his manager stops him and tells him to sing a dance item or else he can leave the bar.

Rudra agrees to it but the manager crosses the line by telling him that he should ask Preesha to dance as she is pretty and will be paid more than Rudra himself.

Rudra is enraged and asks how dare he says that and the manager tells him that his boss asked him to do so.

Rudra asks who his boss is, and the manager tells him that the real boss is Armaan.

Armaan tries to enrage Rudra by saying that he is taking his lending.

Rudra says he quits the job and he isn’t working on Armaan’s giveaways but on his own efforts.

He further tells him that he has Preesha and will manage all things.

Armaan tells him that he is the reason why no one has given him any job and he will make his life more miserable.

At home, Ruhi is happy to see Rudra and asks for food but is disappointed as Rudra is empty-handed.

Pihu comes out of a sudden and tells them that she got food for everyone.

Rudra tells Pihu that he doesn’t want any handouts from Armaan so he will not accept this food.

Even Ruhi and Saaransh tell Pihu to take the food away.

Rudra apologizes to Ruhi for no food, but Ruhi and Saaransh lie and says they went to a party.

Rudra holds them and thanks god for such wonderful children.