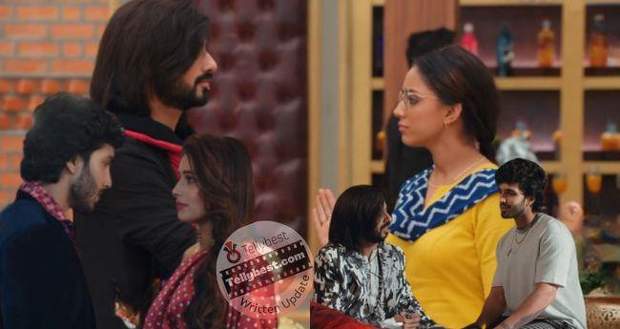 Today's Yeh Hai Chahatein 2nd January 2023 episode starts with Samrat waking up and grumbling about how he landed in his room.

He strokes his forehead & just then, Mohit enters his room.

Samrat says he has a hangover and takes the glass of lemonade from Mohit's hand.

Mohit smiles as he sits beside Samrat on his bed.

Samrat asks him why he didn't stop him from drinking while Mohit shrugs, saying when Samrat listens to anyone regarding alcohol.

Mohit surprises Samrat by revealing that he didn't bring Samrat back into his room but Nayantara.

Samrat gets shocked and refers to her as "Chashmish" while Mohit all praises Nayan, saying no girl today will do this much for a stranger.

Later, Samrat dresses up to say thank you to Nayantara, however, Kiara's father asks him to sit down and play chess with him.

Samrat loses as he isn't able to concentrate due to his buzzing head.

Just then, Chintu walks by both of them and helps Samrat to win.

Samrat gets astonished and goes after Chintu and asks him what he is doing at this wedding venue.

Chintu smartly replies that he is here to attend the wedding while Samrat questions where he got such amazing chess skills from.

Chintu points downstairs at Nayan who is conversing with Malti.

Samrat gets surprised even more so and asks Chintu if he is sure that chashmish is his sister.

Chintu playfully warns Samrat not to call his Akka chasmish and Samrat then meets Nayantara and Ishaani downstairs.

Samrat appreciates Nayan's help while Nayantara gives him a slight attitude, and says she won't always be there to help him.

Samat introduces himself as a person who doesn't take favors and then offers a position to Ishaani in his dance troop.

Ishaani gets excited when Samrat offers her stay in London as well but Nayantara says no.

However, Samrat says he now knows that it wasn't Ishani's fault yesterday and is giving her the position because she is an amazing dancer.

Later, Ishani makes Nayantara wear a pink cocktail dress that hugs her curves but she scolds her Akka when she wears a bindi with this cocktail dress.

Their Paati also arrives wearing a jazzy trending attire with goggles while Malti requests her not to attend the party, otherwise, her work will be affected due to the gossip.

At the party, Mohit watches Ishaani descend and gets mesmerized by her beauty.

They both bump into each other while a servant comes to take help from Mohit to fix a marble vase.

However, Ishaani volunteers to do so and climbs the stairs, but she falls after fixing it.

Mohit rescues her and Enna Sona song plays in the background as he grabs her waist.

Aliya gets angry seeing them together and asks Mohit what he is doing.

Aliya tells him that he cannot touch or hold anyone else than her while Mohit gets irritated and says it feels suffocating to be with her sometimes.

Meanwhile, Samrat approaches Nayan who tells him that it is her first time wearing a cocktail dress as she tugs on it.

Later, Kiara invites everyone to play a game of truth and dare and spins the bottle on the table.

The bottle lands towards Aliya who chooses dare and the dare given to her is to kiss Mohit publicly.

Mohit stands up and says what nonsense, however, Aliya tries to persuade him by saying their marriage will happen soon.

She wraps her hands around his neck and kisses him while Ishaani feels bad to witness all this.

Aliya then invites Nayantara to the table as she searches for Ishaani.

An already uncomfortable Nayantara sits down unwillingly and gets a dare to drink up shots but she chooses a soft drink, thinking she is stuck now.

© Copyright tellybest.com, 2022, 2023. All Rights Reserved. Unauthorized use and/or duplication of any material from tellybest.com without written permission is strictly prohibited.
Cached Saved on: Wednesday 25th of January 2023 11:02:43 AMCached Disp on: Wednesday 1st of February 2023 05:05:34 PM