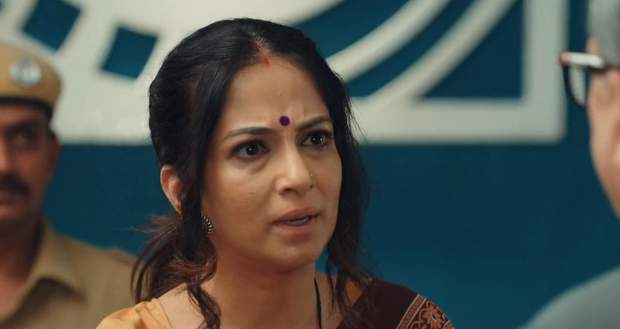 He kicks up the stained jacket and puts it in the tank to be hidden from Revati.

Meanwhile, Preesha and the kids return from school and get confused seeing Revati there.

Revati reveals to them about finding the bracelet at the school terrace and learning the footage has been tempered with.

Rudraksh asks Revati if she's sure to which Revati confirms that she saw CCTV footage from the gate camera and the store in front of the school.

Flashback shows, Revati seeing the footage from the shop opposite the school and seeing Dev entering the school with the bracelet in his hands.

Revati requests Rudraksh the information about the security company

Rudraksh acts of finding the number of the owner on his phone when an employee comes there and tells him that he has urgent work.

Rudraksh goes outside with the employee and calls the CCTV owner who tells him that he has closed the company and left the city as instructed.

Rudraksh tells the owner to not return for a few days and to destroy the sim card once they disconnect the call.

Back inside the house, Revati tells her frustration to Preesha about how she is working day and night to find Dev.

A servant comes and tells Preesha that the water taps are not working to which she tells him to call the plumber.

Rudraksh comes back inside and tells Revati that he called the owner but got no reply from him.

Revati takes the number anyways and takes her leave.

However, just outside the house, she sees a servant arguing with the plumber with a waistcoat in his hand.

Revati realizes that it is the same waistcoat that Rudraksh wore on the annual function day and buys the coat from the plumber.

Revati gives the coat to the police and tells him to send it for forensic research.

Elsewhere, Rudraksh tries to find the waistcoat when the servant informs him that the plumber took it with him.

At night, Rudraksh sits closing his eyes due to tension when Roohi comes there and offers to give him a head massage.

Later, Preesha comes there and sends Roohi to her room realizing that Rudraksh has fallen asleep.