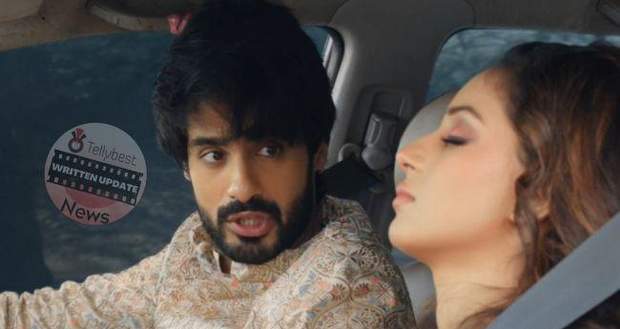 Today's Yeh Hai Chahatein 2nd October 2022 episode starts with Preesha going breathless as Pihu calls Rudra to check on her from the mandap.

Soon enough, Preesha falls to the ground concerning everyone along with Arman.

Pihu says only Rudra is suitable for Preesha and he should stay with her, not Arman.

However, Rudra gains control of the fight and kicks Arman in the back, and tells a hurting Arman to stay away from Preesha.

Emotional and concerned, Rudra goes to pick Preesha up in his arms and drives the car to reach the hospital.

Arman doesn't accept his defeat and recalls how he failed the brakes of Rudra's car a while ago.

However, he panics as Preesha is also in Rudra's car and Arman doesn't want her to die.

Meanwhile, Ruhi sadly asks Sharda if Preesha will get normal or not.

In the car, Preesha stays unconscious while Rudra looks at her and remembers all their moments together, be it in rain, at Khurana House, playful teasing, etc.

As Rudra is driving, he doesn't notice Arman's car is also following him while the road is wet.

At Khurana House, Sharda prays to Goddess Durga along with Ruhi and Saaransh who just want their mother now.

Arman tries to match the speed of Rudra's car and curses his name because the brakes of the car are failed.

Rudra soon realizes this as he takes a turn and the car doesn't slow down.

On the other hand, Pihu, Raj, and Vidyut get stuck as the fuel gets of their car gets finished.

Pihu blames Vidyut for not checking the fuel before while he angrily says he did not drink it.

Meanwhile, Rudra panics when he sees a red light but it turns green thankfully.

However, a truck speeds from the other side of the road and crashes Rudra's car.

The car window breaks and the car twirls in the air, throwing both Preesha and Rudra on either side of the road.

Preesha hurts her head against a rock as blood oozes out of her forehead along with Rudra who finds it hard to stand up.

© Copyright tellybest.com, 2022, 2023. All Rights Reserved. Unauthorized use and/or duplication of any material from tellybest.com without written permission is strictly prohibited.
Cached Saved on: Monday 21st of November 2022 08:12:54 AMCached Disp on: Tuesday 6th of December 2022 12:58:04 PM