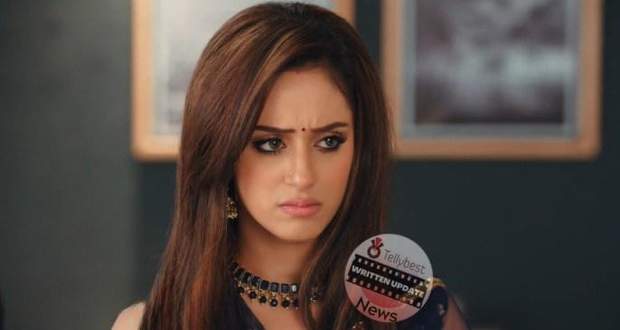 Today's Yeh Hai Chahatein 2nd September 2022 episode starts with Prem apologizing to Kanchan, saying he tried to save the Orchids but the Indian manure did not suit it.

This is why Prem’s wife had to steal the orchids from Khurana House.

Vanshika asks Kanchan if she is still going to fire Prem but Kanchan says she will not fire him.

Vanshika gives a toothy smile and declares she will stay with Prem Ji here.

However, Arman gives an expression as if he is disgusted by both Prem and Vanshika and says this is not a Dharamshala.

Vanshika starts to cry and goes to Kanchan and Preesha for support to let her stay in Thakur House.

Preesha and Kanchan fall for Vanshika’s tears while Rudra grins inside.

Arman feels defeated as he had planned everything diligently to kick Prem out of the house.

Vanshika and Rudra then go to meet Ruhi and Saaransh. Ruhi opens the door and doesn’t recognize Vanshika who greets Ruhi as Prem’s wife.

Saaransh laughs while Vanshika tells Rudra she did a small mistake of duping the orchid plant in a hurry outside Arman’s House.

However, she caught him taking it out and went to MK to save Rudra.

Saaransh then asks both Rudra and Vanshika what is the next step of their plan to bring Preesha’s memories back.

Rudra says Preesha doesn’t have a panic attack when Rudra meets her now but she also doesn’t seem to remember the moment.

Meanwhile, Pihu goes to Khurana House to meet Raj who is sulking in his room and playing guitar.

Sharda greets Pihu warmly while Pihu asks Raj not to ruin their friendship since she or Kanchan would never mess with Raj’s beautiful voice.

However, Pihu says she has good news that Raj’s audition with a big company named K Music liked his audition tape.

Pihu smirks and lets Raj know that she sent one of Raj’s recordings while they used to practice.

Just then, Vidyut comes and forces Pihu to stand up and get lost. Pihu threatens Vidyut to ever touch her again while he says she shouldn’t have been there.

On the other hand, the psychologist informs Rudra that to touch the root of Preesha’s memory issue, he first needs to find the kind of medicines Arman is giving to her.

Ruhi decides to pave her way to meet Preesha at night so she can spot Arman giving medicines to Preesha.

Ruhi takes a peak at Arman who is seen mixing a white powder to Preesha's water.

© Copyright tellybest.com, 2020, 2021. All Rights Reserved. Unauthorized use and/or duplication of any material from tellybest.com without written permission is strictly prohibited.
Cached Saved on: Friday 30th of September 2022 07:17:50 PMCached Disp on: Saturday 1st of October 2022 05:45:34 PM