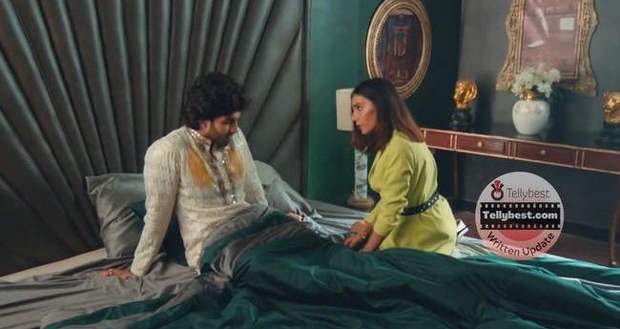 She urges Nayantara to sit in the front but Nayan shakes her head negatively.

Chintu goes to sit with Paati at the front while Malti also takes Nayantara to sit in the front.

Samrat comes to perform and Ishaani personally thanks him for giving her this chance.

The DJ starts the song from the back and Samrat lip-syncs to his song.

Everybody enjoys the song until Ishaani's leg gets stuck with the wire and she falls.

The background music stops and everybody realizes that Samrat was lip syncing.

Samrat gets booed by the audience and he glares at Mohit since he had to take care of it.

Mohit tries to stop Sam but Sam storms off while Kiara questions Aliya how could Samrat do this and make her Sangeet function a mere joke.

Nayantara climbs up the stage and tries to calm down Ishaani who keeps saying that it is her fault.

Nayantara asks her not to worry while Mohit also tells her that it's not her fault.

Mohit ends up scolding the DJ whom he gave instructions to tape the leftover wires.

Later, Samrat glares at Mohit and says he was the responsible one since with a sore throat he could not sing.

Aliya also comes into the room and scolds Samrat while Ishaani is next in line to apologize.

Samrat yells at Ishaani, asking her what he will do with her sorry now since it was so humiliating.

Ishani ducks her head low and Samrat raises his hand at her until Nayantara saves Ishani and throws Samrat's hand back.

Nayantara asks Samrat if these are the manners his parents raised him with and says it wasn't Ishani's fault.

Samrat also yells at Nayan when she calls him a fraud and states he was just lip-syncing his song.

Mohit asks Samrat not to use crude language while Nayan shields Ishaani from his verbal abuse.

Samrat leaves the farmhouse angrily while Aliya suspects Mohit to have feelings for Ishaani.

Both the sisters calm down each other and wish that society started to recognize women for their innate qualities.

Meanwhile, Nayantara's words about his parents keep ringing in Samrat's head as he roams in the city with the driver.

He sees the Khurana House and smashes his alcohol bottle against it.

Later, he excuses the driver and drinks up.

Nayantara also comes there at night and hears somebody grumbling.

She asks who is there and Samrat raises his now empty alcohol bottle from the garbage bin, stunning Nayantara.

© Copyright tellybest.com, 2022, 2023. All Rights Reserved. Unauthorized use and/or duplication of any material from tellybest.com without written permission is strictly prohibited.
Cached Saved on: Wednesday 25th of January 2023 10:27:47 AMCached Disp on: Thursday 9th of February 2023 05:08:04 AM