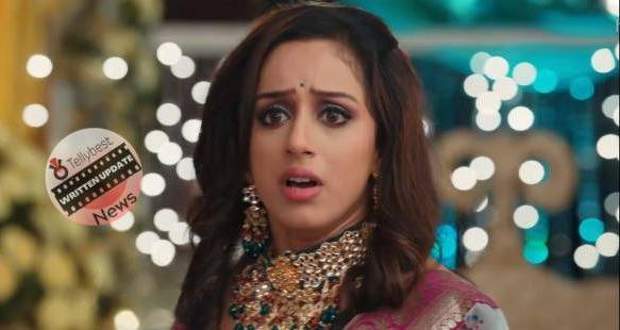 Today's Yeh Hai Chahatein 30th September 2022 episode starts with Saaransh telling Roohi that he has added some laxatives to Armaan's food to keep him busy with the toilet.

Further, the duo goes to Pihu and requests her to call Preesha with the landline phone.

Afterward, Roohi goes to Preesha with the food and feeds her as Preesha's phone starts ringing.

Roohi cannot take out the phone as her hands are dirty and tell Rudra to help them.

Rudraksh takes the phone from Preesha's pocket slowly and takes her to the side so that they can hear the person on the other hand.

Further, Rudraksh flirts with Preesha as he holds her close and talks about how he loved the belly piercing.

Just then, Armaan comes there and gets shocked seeing them together as he gets filled with jealousy.

Later, Armaan overhears Sharda giving Rudra's suit and tells the servant to give it to Rudra.

Further, Armaan dips it in the oil and lights it on fire after giving it to Rudraksh.

However, Preesha notices the fire on Rudra's cloth and rushes to save him while Armaan gets annoyed.

Preesha's dupatta and lehenga also get on fire and Rudra rushes to save her.

Preesha gets flashbacks of Rudra saving Roohi the same way in the past and wonders how she knows about this.

Later, Armaan tells Preesha that they should go back home but leaves for the toilet as he again starts having stomach pains.

Meanwhile, Preesha takes Pihu with her to the kitchen and asks her if something like this happened before.

Roohi gets happy and tells her when and where it happened which makes Preesha even more overwhelmed.

Further, Armaan takes Preesha and Pihu out while complaining about Rudra and the Khurana family.

On the other hand, Roohi tells Rudraksh and Saaransh that Preesha is regaining her memories with her kids in it.

Rudraksh gets happy as he tells the kids that they are closer to the thief's goal while Roohi praises him for the successful fake marriage track.

On the other hand, Armaan has overheard their conversation and gets angry thinking that his sister is against her.

Meanwhile, Roohi also reveals that Preesha has stopped taking the medicines given by Armaan.

© Copyright tellybest.com, 2022, 2023. All Rights Reserved. Unauthorized use and/or duplication of any material from tellybest.com without written permission is strictly prohibited.
Cached Saved on: Monday 21st of November 2022 05:37:05 PMCached Disp on: Wednesday 7th of December 2022 02:30:17 PM