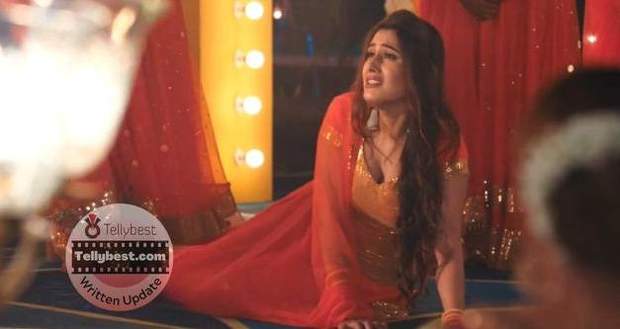 Today's Yeh Hai Chahatein 31st December 2022 episode starts with Nayantara getting shocked to see Samrat in a heap of garbage.

Meanwhile, Samrat is drunk as Nayantara questions him what he is doing here.

Samrat replies that he wanted to spend some time.

Nayantara thinks he deserves to live in the garbage while Samrat questions her about who resides in her family.

While fixing her glasses, Nayantara says that she has Paati, her mother, siblings, except a father who died in an accident.

Samrat calls her lucky as she has her full family and says he doesn't have anyone to love him unconditionally.

Samrat's comment makes Nayantara think that he is an orphan and when she asks him this, Samrat says he has a mother but she adopted him.

She then tries to help him come out from the garbage as Samrat makes a sneaky comment saying whenever she sees him, she does postmortem out of his upbringing.

Samrat swings his body as he takes the support of Nayantara's shoulder and comes out of the garbage bin.

On the other hand, Ishani is out there on the farmhouse's balcony, staring at the stars and the Moon, and says why she was the one who messed up with the dance.

She still feels humiliated for messing up Samrat's performance and Mohit comes there, after hearing her ramble.

Mohit utters that this is life and it is unfair most of the time.

Ishaani turns to Mohit and smiles, saying his life must be perfect because he is Samrat's manager, lives in London, and has a beautiful fiance he loves.

However, Mohit tells Ishaani that he also has problems in life and Ishaani offers him her hand of friendship, saying she is a good listener with whom he can share his woes.

Meanwhile, Nayantara brings Samrat to his room and on his way, Samrat reminds her that she once said that even if he is the last man on Earth, she wouldn't be with him.

However, she is close to him now and Nayantara replies that if she lets go of him, he will fall flat on his face.

Samrat chuckles and asks Nayantara what her name is as he begins to call her "chashmish" and he settles him on his bed.

Nayantara reveals her name to him as Samrat pulls her by her hand, removing her specs.

Dil Sambhal Ja Zara song plays in the background as Samrat stares at Nayantara and reveals to her that she has beautiful eyes.

Nayantara asks Samrat to give it back since she cannot see anything without them.

Samrat soon falls asleep and Nayantara unties his shoes so he can sleep comfortably.

When Mohit comes there, he thanks Nayantara for treating Samrat like a normal human being because people often forget that.

Later, Nayan tells Ishaani about Samrat and says he is carrying so much pain in his heart.

Ishaani tells Nayan that she was too quick to judge him and then tells Nayan she made a friend out of Mohit.

Nayantara asks Ishaani not to be more than friends with Mohit since they don't have equal status but Ishaani asks her Akka not to worry.