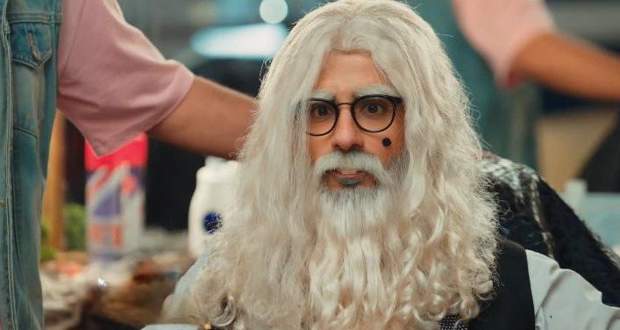 He greets Rudra as the "one & only Rudraksh Khurana" and asks him what he can do.

Vanshika and Roohi tell MK that he needs to transform Rudra into a gardener.

MK gets shocked but takes on the challenge. He makes Rudra wear a variety of wigs in front of Roohi, Saaransh, and Vanshika and after all, they all agree on a grey wig.

Meanwhile, Pihu makes a scene at home, getting pimples on her face after buying a new cream from the store.

Pihu huffs and sits down on the bed while Preesha tells her not to worry, saying it is just an allergy and can be treated with medicine.

However, Pihu tells Preesha and Kanchan she has a college party to attend and cannot wait for the entire night.

Kanchan then suggests Pihu go to MK Make-up studios, the best make makeup in Delhi, who can help Pihu for the night.

Meanwhile, Rudra's makeover gets finished after MK applies a big, black mole on his face.

Roohi claps her hand in excitement while Rudra doesn't recognise himself in the mirror.

MK then tells Vanshika to get gardener clothes for Rudra along with Roohi and Saaransh.

After they exit the studio, Preesha, Pihu, and Kanchan arrive at the MK studio.

Pihu asks MK to cover the red spots on her face and he gets her ready for the party in no time.

However, Rudra sees Preesha and panics, saying now his plan will fail if she sees him.

He then calls Vanshika and asks her to do something.

Meanwhile, Roohi tells Saaransh and Vanshika that they need to dirty the clothes they bought for Rudra because the gardener doesn't wear brand new, clean clothes.

Saaransh then puts the soil on Rudra's clothes with Vanshika getting a call from Rudra.

After Rudra explains that he saw Preesha, Vanshika calls MK and asks him to distract the new people who are in his studio because it is in their house only Rudra will go as a gardener.

MK then asks Vanshika to call Rudra and ask him to exit through the bathroom window since Preesha is waiting to go use the restroom.

© Copyright tellybest.com, 2022, 2023. All Rights Reserved. Unauthorized use and/or duplication of any material from tellybest.com without written permission is strictly prohibited.
Cached Saved on: Monday 21st of November 2022 06:04:39 PMCached Disp on: Monday 5th of December 2022 02:41:48 PM