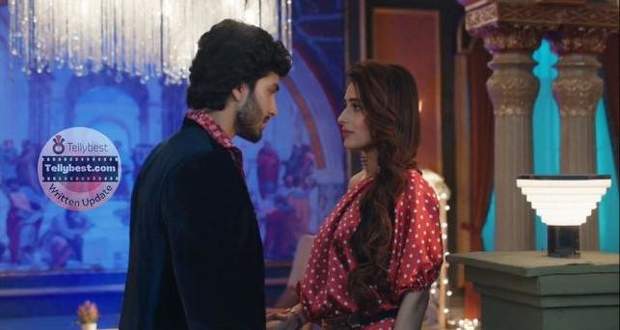 She starts doing Bharatnatyam while Aliya and her friends make fun of her.

A waiter stands beside Sam and calls Nayan a cartoon for doing Bharatnatyam to a Bollywood song.

Sam slams his drink on the bar as he walks over to Nayan and starts complimenting her for doing fusion and asks her to teach him.

He also makes the others join him while Alia stands on the sideline.

Sam requests her to dance with him and brings her to the dance floor where Nayan teaches her the right postures and movements.

Elsewhere, Ishaani scolds herself for getting jealous of Alia kissing Mohit and reminds herself that Alia is Mohit's fiancee while she is only his friend.

Just then, Mohit comes there and asks her what she was doing to which she gets flustered as she lies to him to she was just looking at the stars.

He tells her that he likes looking at something else other than the star.

She asks what and he reveals that he likes looking at her as he states that he has confessed the truth.

He tells her that now it is her turn and asks her if she was jealous.

Ishaani refuses as Mohit reveals to her that Aliya kissed him but he did not kiss her back.

Ishaani gets confused and asks him what he means as he reveals to her that she does not like Alia.

He says that he agreed to Aaliya because her family has done everything for his family and it felt hard to deny her marriage proposal.

He holds her face and closes the gap between them.

However, just before their lips touch, Ishaani pulls away from him and tells him that no matter what he says he will marry Alia in the end.

Back at the party, Sam asks Nayantara to thank him for helping her while she states that she did not ask for his help.

He tells her that she was begging with her eyes for help.

She holds her chip up as she says that her eyes did not ask her for help and asks him why he should be concerned.

Sam asks himself why he is concerned about her and leaves telling Nayan that she is right.

At the same time, Kiara tells Aliya that both Nayan and Ishaani are hitting on Sam and Mohit trying to trap them.

Aliya says that she knows these types of middle-class gold digger girls and will teach them a lesson.

Afterward, Kiara calls all the girls to the bar and states that she wants everyone to get drunk in the celebration of her last bachelorette night.

Nayan says that she does not drink while Kiara tells her that she can drink a mocktail and spike it will alcohol.

Further, Nayan's head starts getting heavy while the DJ calls everyone to the dance floor.

Nayan leaves while Kiara and Aliya go after her.

Nayan thinks to wash her face to get rid of the heaviness and goes out of the party to look for a washroom.

Elsewhere, Ishaani returns to her room and washes away her face along with her dreams of Mohit as she tells herself that it can not happen.

Patti wakes up and asks her about Nayan while Ishaani says that Nayan was not with her and gets worried.

Elsewhere, Nayan sees the garbage bin in which Sam had fallen and goes there in her drunken state wondering how he could fall in there.

She also falls inside and laughs at her stupidity while Kiara and Aliya see her and give each other a high-five.

Aliya goes back inside and boasts about her actions to Sam who gets shocked.

© Copyright tellybest.com, 2022, 2023. All Rights Reserved. Unauthorized use and/or duplication of any material from tellybest.com without written permission is strictly prohibited.
Cached Saved on: Wednesday 25th of January 2023 09:11:23 AMCached Disp on: Wednesday 1st of February 2023 06:35:21 PM