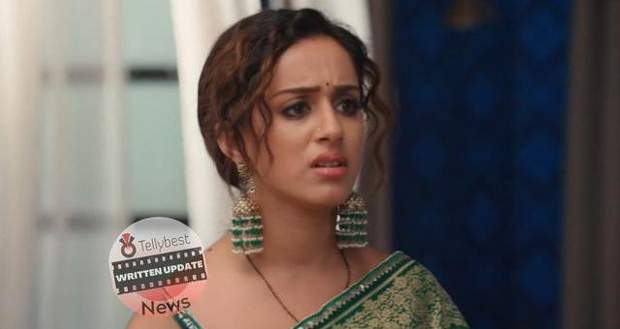 Today's Yeh Hai Chahatein 3rd November 2022 episode starts with Saaransh asking Ruhi not to be sad since he has an idea.

Meanwhile, Rudra tells Pihu that his bedroom is finally under his control and she can decorate it in any way she wants.

Pihu pretends to feel bad for Preesha and suggests Rudra give the room back to SIL.

However, Rudra is firmly decisive when a staff member gives Pihu a courier for her.

She opens it and gets scared as it has a doll bridal dressed inside of it with a steel needle piercing her mouth and one of her eyes is bloodied.

Pihu drops it while Rudra takes a look at it and rushes downstairs to ask the servant who delivered it.

Outside, Rudra finds Preesha talking to the courier boy and he grabs his neck.

The Courier boy tells Rudra he doesn't know whose parcel is this while Rudra asks Preesha not to poke her nose in his business.

He then takes his manager's visiting card and calls on the number inside the Khurana House.

The manager then informs Rudra they haven't sent any of their delivery boys to Khurana House.

Rudra then suspects Preesha while Ruhi hears all the commotion downstairs.

She goes upstairs to ask whether Saaransh did this and he says no.

Pihu also shows the letter she has received with the doll and cries.

Rudra says there is only one man who can do this and it is Armaan.

However, Pihu tells Rudra that Armaan cannot do this since he is a seven-year-old right now.

She then glares at Preesha, saying his finances are not even under his control when Raj enters the Khurana House.

Pihu tells Rudra that Raj can do this since she rejected him.

Without thinking, Rudra grabs his collar and shows him the doll.

Raj gets hurt by Rudra’s anger and says he doesn’t even have time to do all this since he is coming back doing a jingle event.

Pihu looks down, ashamed, as Raj tells Rudra he understood long back that you can’t make someone love yourself forcefully.

Rudra instantly apologizes to Raj and they both hug it.

At night, Preesha is on the terrace when Rudra comes and strokes her shoulders.

He whispers in her ear, saying she used to love it when he would massage her this way.

However, Preesha jerks Rudra back and says he shouldn’t do this since he is engaged to Pihu and she is married to Armaan.

Rudra laughs and tells Preesha her marriage with Armaan is a joke while she tells him if he had come back, she wouldn’t have to marry Arman.

When she asks why he is coming close to her, Rudra utters to find out the truth, making Preesha storm away angrily.

In the morning, Sharda sends one servant with a list of items to be bought from the market.

When he asks for money, Sharda gets anxious and says she will give it later.

Pihu notices this and goes to Preesha, telling her about the lack of money with Sharda.

© Copyright tellybest.com, 2022, 2023. All Rights Reserved. Unauthorized use and/or duplication of any material from tellybest.com without written permission is strictly prohibited.
Cached Saved on: Monday 21st of November 2022 06:53:18 AMCached Disp on: Wednesday 7th of December 2022 01:10:57 PM