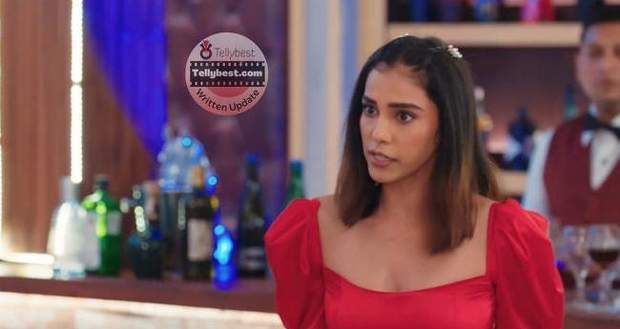 Sam gets shocked as Alia tells him how she and Kiara made Nayan drink alcohol without her knowledge.

However, instead of laughing with her as Aalia expected, Sam tells her that he has some work and leaves from there.

Ishaani asks Mohit to forget her

Elsewhere, Ishaani is looking for Nayan when she again bumps into Mohit.

He asks her why she's avoiding him and she tells him that she has to look for Nayan first.

Mohit informs her calmly that Nayan is still at the party playing truth or dare and he drags her to his room.

In the room, Ishaani looks away from Mohit while he tells her how he feels around her and tells her that he has fallen in love with her.

Ishani recalls how Alia kissed Mohit in front of everyone and looks away from Mohit as she asks him if he can tell Alia that he loves Ishaani and not her.

Ishaani tells him that he should not even think about something that has no future and states that there is love in this story but it is not a love story.

She leaves telling him that they should stay away from each other.

On the other hand, Sam shouts for Nayan by using the 'Chashmish' nickname while she points her hand upward and tells him that she is there.

Sam notices the hand from the garbage bin and tells her to come out while she asks him who is he.

Sam tells her to look at him and tell him who he is.

Nayan looks at him and finally recognizes that he is a rockstar while she tells him that he is drunk.

Further, Sam tries to help her get out of the garbage bin but she doesn't cooperate and they both fall to the ground.

In her drunkenness, Nayan again blames Sam and tells him that he is so drunk he cannot even stand properly.

Further,  Nayan tells him that she is seeing two of him while he takes her hand and put it on his face while saying that he is the real one.

Nayan again laughs as she pinches his cheeks and tells him that he has a good face.

Sam also looks at her and tells her that she is also not bad but hides it behind her glass and aunty's attitude.

Further, he tries to get her to walk while she tells him that the ground is moving like an escalator.

Sam gets frustrated and picks her up in his arms while he tells her that he's her prince.

Nayan smiles as she plays with his hair and asks him where is his white horse.

Later, in the hall, Nayan tells Sam that Patti and Malti will make a paste out of her if they see her in this state.

Sam suggests his room while she argues that she knows his intentions and will not come into his room alone.

However, Sam tells her that he does not even touch a girl until she assures him.

He again picks her up in his arms and takes her to his room.

Back at the party, Ishaani asks Kiara about Nayan who tells her that she saw Nayan going outside.

Ishaani thanks her and leaves while Alia looks at Ishaani with a fit of boiling anger.

Back in Sam's room, he makes her drink lemon juice to get over her hangover while she argues that she knows he was making a joke of her because she is dark-skinned and she knows no one would take advantage of her.

He sits beside her while she tells him that he has everything while she has nothing.

However, Sam tells her that she has a family of her own.

He tells her how he does not have anyone to call his own and how the people who are with him are with him only because of his money and fame.

As Sam says that nobody would care if he dies, Nayan puts her finger on his lips and tells him that life is given to enjoy and that she will get angry at him if he speaks about that again.

Further, Sam takes Nayan back to her room while Patti and Malti ask if she is drunk.

However, Ishaani and Sam make up a believable excuse and kick them out of the room.

Sam also leave without informing anything to Ishaani.

The next morning, Nayan walks up with a heavy head while Ishaani brings coffee for her and asks her how she ended up drunk.

Nayan talks about drinking soft drinks while Ishaani realizes that it is Alia and Kiara's doing.

© Copyright tellybest.com, 2022, 2023. All Rights Reserved. Unauthorized use and/or duplication of any material from tellybest.com without written permission is strictly prohibited.
Cached Saved on: Wednesday 25th of January 2023 10:29:32 AMCached Disp on: Thursday 9th of February 2023 05:02:18 AM