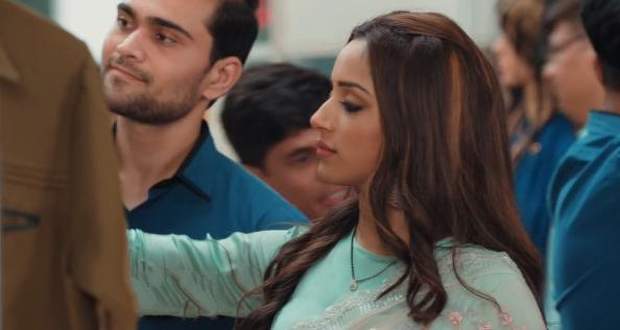 When Rudra asks the billing staff to pack them for him, the staff reminds Rudra that his wife has already chosen these for him.

Rudra gets confused for a second but chuckles later, thinking that the staff thought Vanshika to be Rudra’s wife.

Meanwhile, Preesha and Vanshika are trying dresses in trial rooms adjacent to each other.

When Rudra messages Vanshika to hurry up, she asks Rudra to throw the white dupatta kept outside.

Rudra throws it in Preesha’s trial room by mistake and gets busy on a call.

Preesha thinks that one of the staff members could have thrown it.

After Vanshika and Rudra leave, Preesha arrives at the billing counter and asks the staff about the shirts she chose.

However, the staff informs her that Preesha’s husband already purchased it, making Preesha utterly confused.

Hoping to catch the man who happens to be Rudra to ask for the shirts back, Preesha follows an oblivious Rudra and Vanshika.

However, her effort goes in vain due to a car that blocks her way from reaching Rudra.

On the other hand, at college, Pihu gets chosen to be Juliet and Vidyut to be Romeo.

However, Pihu tells Vidyut to stay away from her since he is beginning to show some interest in Pihu’s quirks.

Meanwhile, Roohi feels dejected when the security guard informs her that the lady, she is looking for has already left the Cupola Hotel.

Both Saaransh and Roohi return home upset and think of another way to find Preesha.

On the way, Rudra’s car gets broken which leads to Vanshika asking the passing cars for a ride back home.

It is Pihu who stops for Vanshika but gets shocked when she sees Rudra getting in the backseat.

When Pihu drops Rudra and Vanshika back home, Saaransh recognizes Pihu to be the same girl he saw with Preesha at the party.

Roohi and Saaransh secretly see Vidyut, Raj, and Pihu conversing in the parking lot and get a brilliant idea.

Saaransh decides to go to Vidyut’s college along with Roohi to ask Pihu about Preesha.