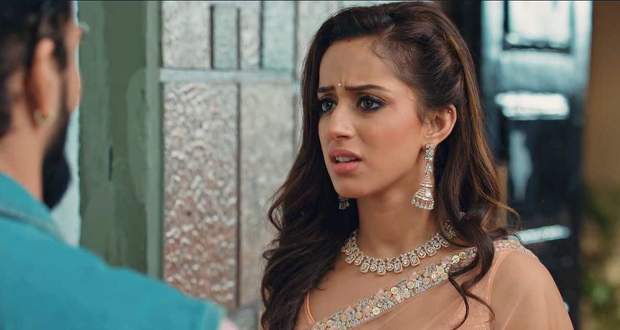 Today's Yeh Hai Chahatein 5th August 2022 episode starts with Roohi telling Rudraksh to come downstairs with him for the training on how to do gardening.

Further, Rudraksh gets hesitant to get his hands dirty for the work but the kids tell him to be focused and tell him to learn everything.

Rudraksh manages to plant one pot and gets covered in mud by the end of it as the kids hug him and call him Mali Papa.

Meanwhile, at the college, the professor instructs the class that the next project will be done and cites the names of the pairs.

Raj and Pihu get paired up together which makes him happy.

At the end of the class, Raj returns the tiffin to Pihu while she teases him saying that she will talk to the professor about changing pairs.

However, he tells her that he's okay with it and they become friends at last shaking hands as a symbol of the start of their friendship.

Back at Armaan's house, Saaransh and Roohi encourage Rudraksh while he gets hesitant realizing that he will have to give an interview after seeing a long line of gardeners.

Back in college, Pihu gets annoyed as she cannot do the correct notes and regretfully admits to Raj that she's a bathroom singer and joined the class only to support him.

Raj tells her that she will teach her everything since he values the grades given by the assignment while Pihu admires him singing.

Meanwhile, at the mansion, Rudraksh tells Kanchan that even though he's old, he has a passion for gardening.

Further, Kanchan takes Rudraksh's practical test and he passes each of them.

In the end, Kanchan tells Rudraksh she thought to not give him the job due to his old age but seeing his experience, he has gotten the job as their gardener.

Later, Rudraksh keeps doing gardening while Preesha comes there and Kanchan introduces him as their new gardener.

Rudraksh further tells Kanchan that he lives very far away and as a resort, Kanchan tells him to live in the servant's quarter and start work from the next day only.

At night, Rudraksh and the kids return home and inform Sharda that he has gotten the job as the gardener.

© Copyright tellybest.com, 2022, 2023. All Rights Reserved. Unauthorized use and/or duplication of any material from tellybest.com without written permission is strictly prohibited.
Cached Saved on: Saturday 28th of January 2023 02:25:56 AMCached Disp on: Thursday 9th of February 2023 07:50:18 AM