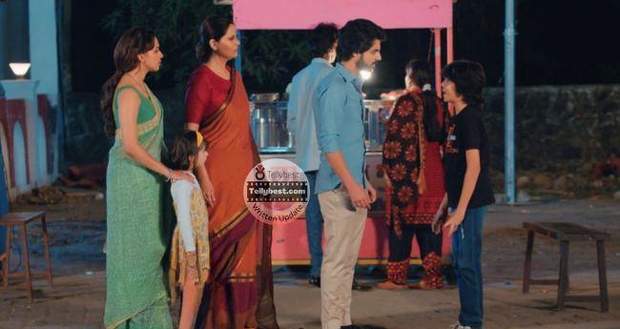 Today's Yeh Hai Chahatein 5th December 2022 episode starts with Saaransh and Ruhi sneaking into the house as Rudra and Preesha distract the goons.

Saaransh and Ruhi try to unknot Vidyuth and they explain that Rudra is alive and distracting Armaan’s men outside.

The goons notice that Saaransh and Ruhi are dragging Vidyuth outside and one of them tries to attack the kids but Rudra beats the goons.

Preesha picks up a log and hit both of the goons on their head while Rudra ties the goons and breaks their mobile.

Afterward, Rudra carries Vidyuth on his shoulder and tells him that Armaan won’t be able to reach him.

Later, at their house, Sharda gives water to Vidyuth and Rudra gets happy to see his brother.

Rudra tells Vidyuth that they all thought that he was dead.

To this Vidyuth replies that he was ready to die in front of the train but Armaan pulled him out of the tracks.

Afterward, Armaan took him to a deserted warehouse and told him that Pihu is on her way to meet him.

Armaan took out an injection and put Vidyuth to sleep and said to himself that he will keep Vidyuth alive so that he can use him when the time comes.

Preesha intervenes and says that Armaan is a madman who is extremely ambitious and Vidyuth asks to meet Pihu.

The next morning, they call Pihu and surprise her with Vidyuth while Pihu hugs him and starts crying.

She asks if he was alive all this time, why didn’t he come to her.

Vidyuth tells her the truth that Armaan kept him locked up for 4 months and tortured him.

Pihu’s emotion busts out of her eyes and she declares that she hates her brother.

Vidyuth says that he thinks that Armaan was the one who planted the bomb as he was out on Parole.

Rudra agrees with Vidyuth while Pihu holds Vidyuth and says that she is done with Armaan and now it’s time for him to pay.

Preesha asks Pihu to tell Vidyuth the good news about her pregnancy.

Hearing about that, Vidyuth is filled with joy and remembers the time he spent with her.

Pihu pledges that she will not leave Armaan after this.

She tells that even when her brother knew about her pregnancy, he kept Vidyuth away from her.

Rudra intervenes and tells Pihu that she is not alone in this battle, he and Preesha along with all the others are here with Pihu.

They all pledge that they will bring Armaan down.

Later, at Armaan’s, Preesha and Rudra ask Armaan to call the police as Pihu revealed the truth about Armaan to Digvijay.

Pihu asks Armaan how he could do all this to his little sister.

To this, Armaan tells her that his hatred towards Rudra made him do all this.

© Copyright tellybest.com, 2022, 2023. All Rights Reserved. Unauthorized use and/or duplication of any material from tellybest.com without written permission is strictly prohibited.
Cached Saved on: Wednesday 25th of January 2023 11:51:39 AMCached Disp on: Sunday 5th of February 2023 03:21:47 AM