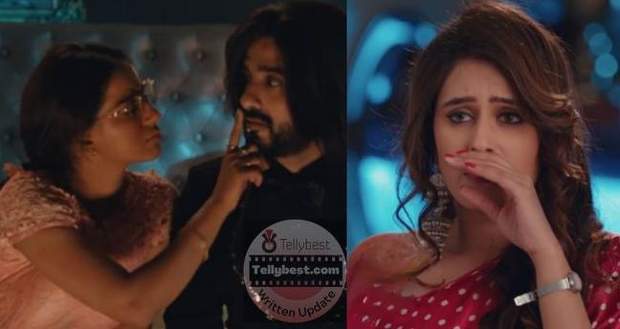 She even asks Ishani where she went away as Alia and her friends were making fun of Nayantara.

Ishani mumbles that she went away for some time, but Nayantara reminds Ishani that she is her sister, so she should spell the truth.

Recalling Mohit’s words about how he thinks he is in love with her, Ishani expresses her dilemma about liking Mohit even after knowing he is getting married to Alia.

Ishani further tells Nayantara despite knowing she should stay away from Mohit she has developed feelings for him.

Hearing this, Nayantara advises Ishani to stay away from Mohit because she will get hurt even more if she continues talking to Mohit.

Even Ishani reveals that Mohit will never break his marriage with Alia since her family has done so much for Mohit so she will not meet Mohit again.

While Nayantara nods, Ishani reminds her about Samrat and Nayan’s friendship.

Meanwhile, Samrat wakes up from his sleep and picks up the rubber band with a soft smile as he recalls his last night with Nayantara.

Entering the room just then, Mohit tells Samrat that this is the first time he sees Samrat smiling but Samrat does not respond.

At the same time, Alia arrives to remind Mohit and Samrat about their plan to return to Belgium after the marriage.

Once both Mohit and Alia walk away, Samrat tells himself how he is feeling sad for leaving this country.

Picking up the ribbon, Samrat tells himself that it must be due to Nayantara’s simplicity while his sweet moments with Nayantara flash before his eyes.

Later, Samrat finds Nayantara in the hall. He starts gazing at her and feeling the sudden attraction he starts walking toward her.

However, turning away, Samrat reminds himself that Nayantara is very okayish so he should not feel attracted toward her.

Meanwhile, both of them turn toward each other, and Nayantara reminds herself that she should not smile at this person as he is weird.

At the same time, Alia arrives there with a designer to complain to Samrat about this person ruining her lehenga design.

Looking at Alia’s tears, Samrat pounces on the designer for making his sister cry which makes Nayantara change her mind about saying thank you to Samrat.

Later, Mohit takes Ishani to a corner where no one can see them by grabbing her and he informs Ishani how much he loves her but Ishani walks away.

However, when Nayatara sees Mohit, she advises him to stay away from Ishani as it takes a lot of effort to stay with the person they love and she knows Mohit is buried under Alia's generosity.

After Nayan walks away, Alia asks Mohit about what Nayan was asking to which Mohit absent-mindedly replies that Nayan was just bidding him goodbye.

Though Alia gets suspicious, she does not ask Mohit anything more and walks away.

Later, when Nayan is walking with flowers, she notices Samrat and decides to say thank you.

However, as she goes near Samrat, Samrat starts flirting with a random girl which causes Nayan to rethink her decision.

At the same time, some kids are running in the hall and collide with Nayantara resulting in Nayan falling but Samrat catches her just in time.

After a long gazing at each other, Nayan and Samrat stand up and Samrat tells Nayantara that there is something special between them but Nayan reminds him that their life is very different from each other.

Nayan further tells Samrat that she is just a simple middle class girl whereas Saramt is a rockstar.

On the other hand, Mohit meets Chintu who informs him that he is looking for his sister Nayan which surprises Mohit since he thought Chintu only has one sister Ishani.

Later, Mohit tells Ishani that he will reveal his love for her to everyone and break his marriage with Alia.

© Copyright tellybest.com, 2022, 2023. All Rights Reserved. Unauthorized use and/or duplication of any material from tellybest.com without written permission is strictly prohibited.
Cached Saved on: Thursday 26th of January 2023 07:46:14 AMCached Disp on: Tuesday 31st of January 2023 08:11:32 PM