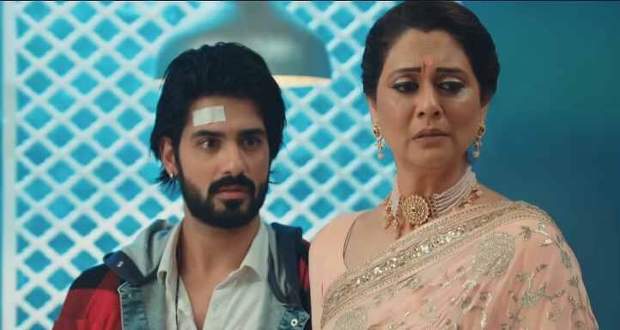 Today's Yeh Hai Chahatein 5th March 2022 episode starts with Saransh asking Sharda to prepare a room next to his for Roohi.

Rudra loses his temper when Vaijayanti calls Roohi Yuvraj's daughter and walks out.

Roohi thanks Saransh for taking care of her just like a big brother. She enquires to Saransh about Preesha getting released from jail.

Meanwhile, Vaijanti meets with Yuvraj to enquire about Roohi’s stay at her house.

While Yuvraj tells Vaijanti about Roohi being Rudra’s daughter and paints a scary picture for Vaijanti’s future if Preesha gets out of jail.

On the other hand, Saransh’s search for a lawyer is meeting dead ends as all the lawyers refuse to take Preesha’s case calling it next to impossible to win.

Preesha and Saransh are meeting in jail where Preesha asks Saransh not to pursue this case fearing for Rudra.

Later, Rudra sees Roohi unable to sleep and worries about her being alone. He expresses his sadness for not being able to comfort Roohi because of her anger.

However, Sharda offers to look after Roohi until Roohi’s anger subsides.

Meanwhile, Saransh asks Rudra to not waste time worrying about Roohi as he is responsible for Roohi’s loneliness and once again sending Preesha away from him.

He further tells Rudra about not being able to find a lawyer for Preesha all thanks to Rudra.

Saransh shows a mirror to Rudra for hurting Preesha and others in anger and cautions him to rectify his mistake before it's too late.

In the kitchen, Vaijayanti asks Saransh about finding a lawyer and offers to take Preesha’s case.

She also tells Saransh that she and Rudra came together as husband and wife only to gain his custody and now she will do everything in her power to save Preesha and unite this family again.