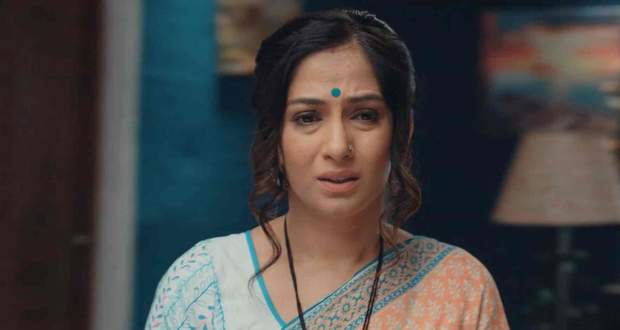 Today's Yeh Hai Chahatein 5th May 2022 episode starts with Revati going to the interrogation room in her uniform and questioning the guy about what he saw.

The guy reveals that he saw Rudraksh disposing of a huge garbage bag and helped him put it into the garbage box.

Revati wonders if her suspicions of the Khurana family are true.

Just then, Revati gets a call that a drunkard is claiming to have seen Preesha near the lake and she asks the drunkard if he can take her to the lake.

At the Khurana mansion, Preesha informs Rudraksh about the incident in the market and panics.

However, Rudraksh tells her to be calm when Revati comes there with the drunkard and questions the couple.

Rudraksh lies that he and Preesha went on a long drive during the stated night while Preesha agrees with her.

Revati further states that she is getting the lake checked and demands them to be present and the couple agrees.

At the lake, a JCB is checking the trunk and they find a polythene bag which they remove from the lake to check.

The police take the polythene bag out while Rudraksh tells Preesha to not reveal anything in shock.

Meanwhile, at the school, Alia overhears Shreya and learns that Dev had attended the annual function at school and feels betrayed by Saaransh for lying to her.

Back at the lake, the polythene bag is opened to reveal only waste produce while Rudraksh starts scolding Revati and leaves with Preesha saying that he can sue her but he won't.

During the car drive, Rudraksh drives recklessly in a daze and is about to hit a woman when Preesha saves both of them by swerving the wheel.

Preesha questions Rudraksh about where he hid the body but Rudraksh refuses to tell her the truth.

Elsewhere, Alia calls Saaransh and interrogates him about hiding Dev's visit to the school on the annual function day.

Rudraksh and Preesha arrive home while Saaransh informs them about Alia's call.