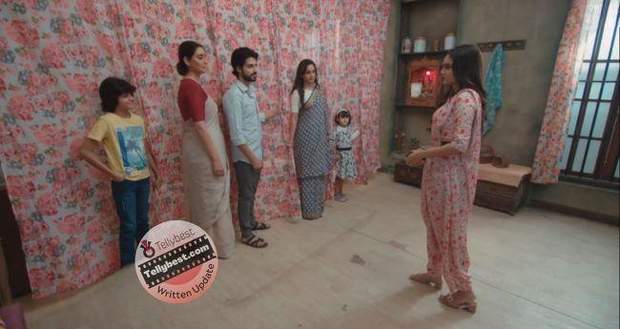 Today's Yeh Hai Chahatein 6th December 2022 episode starts with Armaan telling the truth as to why he kept Vidyuth.

Pihu gets enraged and teary and compares Armaan to an animal.

He gets angry hearing this so he pushes Pihu saying that she has no manners but Digvijay holds her.

Digvijay reminds Armaan that Pihu is pregnant and his sister so how he could push her like that.

Enraged Armaan shouts at Digvijay that he doesn’t give a single damn about Pihu or Digvijay and pushes him telling all of them to leave.

Preesha who is standing there consoles heartbroken Digvijay and tells Armaan that he is arrogant because he has money but what he will do when he doesn’t have money?

Rudra agrees with Preesha and challenges Armaan and leaves with everyone.

Outside the house, Digvijay stops Rudra and starts to apologize for all that he did to them.

Rudra tells Digvijay that there is no need to apologize as the good part is that now even he knows the truth about Armaan.

Further, Rudra tells that he is going to the police station but Digvijay says that they need proof only statements won’t work.

They all go to the police station but find nothing in the files and the CCTV footage.

Outside the station, Armaan comes to meet them and invites them to a party at his house.

Preesha says that this is all a show-off to embarrass them and it doesn’t matter because they won’t go.

At the same time, Rudra comes up with a plan that they can go to Armaan’s party and look for clues against him.

In the evening, they all get ready to leave but Sharada and Saaransh warn them to be aware of Armaan.

At the party, everyone meets and enters Armaan’s party.

Later, Armaan graciously welcomes all his guests and sees that Rudra enters along with everyone else and starts to taunt all of them.

Armaan tells all his guests that he invited them out of courtesy and didn’t expect them to show up but nevertheless these people might have come for the food.

Listening to Armaan insulting them and comparing Rudra and Preesha to beggars, Rudra is enraged but Preesha stops him from hitting Armaan.

Further, Preesha says that he is showing his character in front of everyone and they shouldn’t be bothered by him because he took their stuff by cheating.

Preesha takes Rudra to a side and tells him to calm down and find clues against Armaan.

Meanwhile, Pihu and Digvijay look for some sort of proof.

Armaan snoops on Preesha and she stalls him by saying that her husband knows that she isn’t a child and can keep a dog like him away.

Meanwhile, Rudra looks through the files to get some proof and just gets disappointed.

One of the servants spots Rudra and tells him that Armaan is now staying in Rudra’s old bedroom and asks him to leave.

© Copyright tellybest.com, 2022, 2023. All Rights Reserved. Unauthorized use and/or duplication of any material from tellybest.com without written permission is strictly prohibited.
Cached Saved on: Wednesday 25th of January 2023 11:00:47 AMCached Disp on: Thursday 9th of February 2023 05:51:13 AM