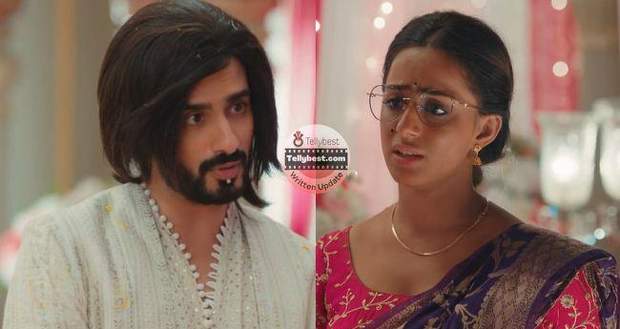 Today's Yeh Hai Chahatein 6th January 2023 episode starts with Mohit telling Ishaani that he talked with Nayan and has realized that love cannot be kept a secret.

Mohit tells her that it is the reason why he is going to confess everything to everyone and is even going to separate from Aaliya.

Mohit holds her close to him as he interlocks his hands behind her waist.

He tells her that the decision depends on her and she hugs him as she says yes.

However, Mohit recalls something and asks Ishaani if Nayan is her sister or her friend since Chintu calls Nayan his sister.

Ishaani finally reveals that she and Nayan are sisters but they hide it since all the suitors who come to see Nayan see her and want to marry her instead.

Mohit laughs while Ishaani hugs him tightly and tells him to not tell this to anyone else.

Back at the wedding, the groom's entry is happening while Chintu is watching it from the balcony.

He gets pushed by some girl and falls from the balcony.

The people get shocked when Sam comes there at the right time and saves Chintu by catching him.

Nayan and Malti rush to check on Chintu while Sam stands there calmly.

Malti takes away Chintu to the room while Nayan thanks Sam for saving Chintu.

However, Sam jokes and tells her that he has helped her three times and got a thank you only once.

She gets shy when he tells her to not worry since he is returning to London the next day and may never return to India making it the last time they are going to be near each other.

Later, Nayan and Ishaani get out of the room after checking up on Chintu while Ishaani suddenly Nayan.

She informs Nayan that because of her motivation, Mohit has told her that he will break up with Alia and will even stay back in India for her.

Nayan tells Ishaani that she is happy for her.

On the other hand, Mohit comes to Aliya's room and tells her that he does not want to be with her and wants to break up with her.

Aliya gets angry as she tells him that she knows he loves her while Mohit tells her that he never loved her from the start and only married her due to family pressure.

She asks him if there is someone else in his life while Mohit tells her that he's just being honest.

Elsewhere, Sam bumps into Chintu whose glasses break and he gets upset.

Sam asks him why he can't buy new ones while Chintu hesitantly reveals the poor financial condition of his family to him.

Sam tells Chintu that he has an idea.

Back in Aliya's room, she destroys the room and tells Mohit to get out of the room as she thinks that she will take payback from Mohit for what he has done to her.

Sam asks Chintu what if he gifts him a new pair of glasses.

Chintu gets happy but refuses afterward as he says that he cannot take new glasses when Nayan's glasses are still broken.

Sam thinks of a plan and nods to himself.

Later, Aliya goes to Kiara and demands she invites Ishaani and Nayan to the after-party since she is sure Mohit has dumped her for one of those two girls.

Meanwhile, in Nayan's room, everyone is packing their bags while three men in suits and a briefcase enter the room scaring everyone.

Nayan asks them who they are while Sam comes there and tells her that they are here with him.

Sam reveals to the family that he accidentally broke Chintu's glasses which is why he will be gifting him a new one.

Chintu argues that he refused while Sam tells him that Nayan will be gifted a pair of glasses too.

However, Nayan bickers with Sam asking him how are they related for her to take a gift from him.

© Copyright tellybest.com, 2022, 2023. All Rights Reserved. Unauthorized use and/or duplication of any material from tellybest.com without written permission is strictly prohibited.
Cached Saved on: Wednesday 25th of January 2023 09:28:18 PMCached Disp on: Tuesday 31st of January 2023 07:15:00 PM