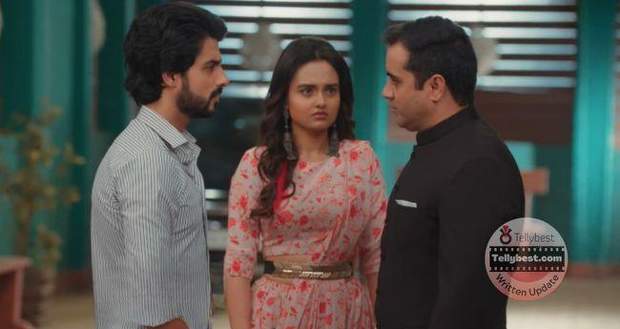 Today's Yeh Hai Chahatein 7th December 2022 episode starts with Digvijay looking for proof in another room and he hopes that Pihu or Rudra finds something.

Meanwhile, Pihu looks in Armaan’s new room but finds nothing and hears footsteps so she hides behind the curtains.

Armaan enters the room and takes out a gavel and notices something is wrong and corrects the painting.

Downstairs, they all meet and turn up empty-handed so Rudra gets frustrated and disappointed and hits the bar while Preesha tries to stop him from getting drunk.

At the same time, Arman walks down and tell that he has an important announcement so all of his guests should gather around.

Armaan starts to insult Rudra by saying that he faked his own death and that he is a complete loser who left the company in the hands of Saaransh a little kid so eventually to save the business Arman had to take over and save it.

At the same time, Rudra gets intoxicated and Armaan unveiled the logo of the Khurana enterprise with his gavel.

Armaan breaks it into pieces and declares that this is the end of the Khurana enterprise and Rudra.

Rudra gets to the podium in his drunken state and shouts that he will destroy Armaan into pieces and he destroys the new logo of the Thakur industry.

Drunk Rudra starts to destroy the whole party decoration and gets his hands filled with cuts and blood.

Rudra attacks Arman and tells him that he will kill him but Preesha stops him with the rest and leaves the party.

Meanwhile, seeing this Armaan gets super satisfied and thinks that Rudra fell right into his trap.

Hearing Preesha ramble on and on Rudra shouts at her and tells her to stop giving him lessons.

Further, he says that Arman took everything from him and they did nothing to him while Arman destroyed everything.

Preesha tries to talk to Rudra but he leaves her there and goes in an auto.

The next morning, Sharda wakes hungover Rudra and shouts at him for getting drunk, and questions the whereabouts of Preesha.

So Rudra tells Sharda whatever happened last night and calls Pihu to ask if Preesha is with her.

Later, all of them meet at the police station and complain about Armaan so the police decide to raid Armaan’s house.

At the Thakur house, the servants greet the police and tell them that their boss hasn’t left his room and they are worried.

So the police break the door and see something shocking inside.

© Copyright tellybest.com, 2022, 2023. All Rights Reserved. Unauthorized use and/or duplication of any material from tellybest.com without written permission is strictly prohibited.
Cached Saved on: Wednesday 25th of January 2023 12:17:54 PMCached Disp on: Monday 6th of February 2023 04:59:53 AM