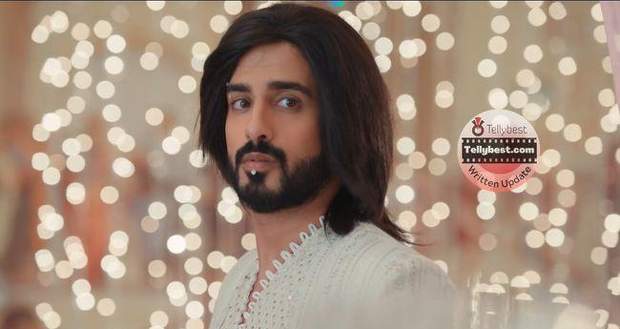 Today's Yeh Hai Chahatein 7th January 2023 episode starts with Nayan arguing with Sam while he continues to try to convince her.

Sam tells her that if she doesn't want to accept the gift, she can think of it as a loan.

Nayan gets hesitant while Sam tells her to think about Chintu and accept it.

Further, Sam leans on the pillar and looks at Nayan through the mirror while smiling and frowning according to the frames.

Nayan also smiles when he gives her a thumbs-up on the frame that he likes.

Nayan teases Sam by telling the person that she did not like this frame too.

Sam gets surprised while Nayan takes back those glasses and says that those will work.

Chintu tells Nayan that she is looking good in those glasses while Nayan annoyingly thanks Sam.

On the other hand, Aliya comes to Mohit and tells him that she thought about what he did and is ready to break up with him.

However, they need to inform about it to Sam and suggest telling him the truth at Kiara's party.

Mohit agrees and gets back to work while Aliya looks back at him and smirks.

Later, Ishaani is trying to convince Nayan to wear heels while Mohit comes there and informs them about his breakup with Aliya.

Nayan asks him about Sam's reaction while Mohit says that he is sure Sam will calm down once Aliya tells him that they are fine.

They all start walking out of the room while Ishaani goes back to bring back her phone.

Nayan asks Mohit if he is sure Aliya has accepted the breakup while Mohit tells her that it might be cause Aliya was his friend first.

Nayan nods and tries to walk when she suddenly loses her balance and falls.

Ishaani rushes there and apologizes while Mohit tells her to go and get an ice pack.

Meanwhile, at the party, Sam keeps on thinking about Nayan which confuses him and he goes out to get a breath of fresh air.

Alia also comes there and wonders why nobody is at the party.

She continues calling Mohit but he does not pick up the call after which she calls Kiara.

Kiara tells her that she got late in getting ready while Alia frustratingly says that neither Mohit nor Sam are there.

Just then, Kiara sees Mohit and Nayan and gets shocked seeing Mohit pick up Nayan in his arms.

She video calls Alia and shows her the scene which makes Alia's brain go haywire with anger.

She disconnects the call while saying that she won't let Mohit and Nayan go.

Aliya sits on the couch while the people beside her consume drugs in form of pills and enjoy themselves.

She also takes the bottle from them and consumes drugs which makes her lose herself.

Later, Sam gets a call from the police station about Aliya being arrested for consuming and possessing drugs.

He rushes to the police station and demands to take Aliya with him while the police officer stops him and tells him that he can only take Aliya when bail is done.

Sam angrily gets out of the police station wondering who would have called the police.

Flashback shows Nayan overhearing two guys talk about drugging all the girls at the party and then taking advantage of them.

Back in the present, the police officer leaves while Sam goes to Nayan and furiously turns her around by her elbow.

© Copyright tellybest.com, 2022, 2023. All Rights Reserved. Unauthorized use and/or duplication of any material from tellybest.com without written permission is strictly prohibited.
Cached Saved on: Wednesday 25th of January 2023 08:47:26 AMCached Disp on: Wednesday 1st of February 2023 07:12:35 PM