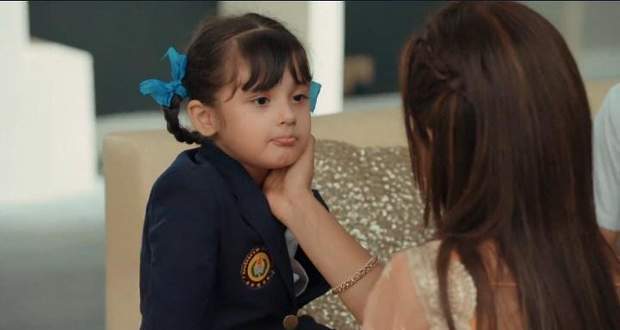 The uncle calls the security to kick out Saaransh while Saaransh hides under the car telling Roohi to hide too.

Roohi gets stuck inside the trunk of the car but stays silent hearing Armaan's uncle and the rest of the family.

Once they leave, Saaransh crawls out from under the car and starts looking for Roohi.

Feeling helpless, Saaransh decides to go to Preesha and asks her for help.

Preesha gets surprised to know that a child is locked inside her car and rushes to the parking lot with Saaransh.

Once opening the car, Preesha sees Roohi and gets a glimpse of the same scenario from her memory.

Preesha takes Roohi inside the house while Saaransh goes after her.

Meanwhile, Armaan and the rest of the family look on.

Roohi regains consciousness and addresses Preesha as her mother.

However, Preesha says that she isn't her mother and asks them about their mother so that she can send them back home.

Back at the Khurana house, Rudraksh is about to call the police to file a missing complaint for the kids while Vanshika hesitantly informs him that she knows the kids' whereabouts.

Back at Armaan's house, Armaan tells Preesha that he knows the parents of the kids and offers to drop them off with their kids.

Meanwhile, Saaransh gets confused seeing Armaan and wonders why Preesha is living with him.

Rudraksh learns that the kids hid in Pihu's car and decides to get the kids by going to her house.

Elsewhere, Armaan lies to the kids that Rudraksh-Preesha fought which led to Preesha leaving Rudraksh and forgetting her past.