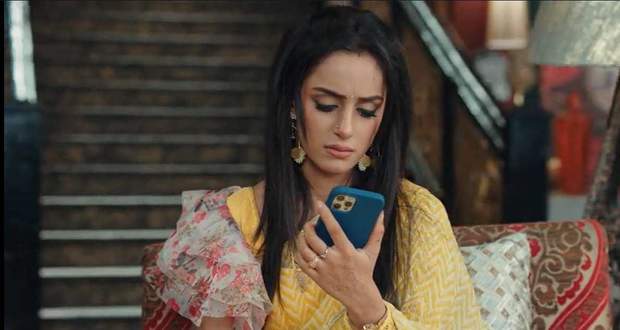 Today's Yeh Hai Chahatein 7th June 2022 episode starts with Rudraksh bringing Preesha to a yoga class saying that they will both learn how to handle their baby.

Preesha offers to teach him while Rudraksh says that they will do it together and makes her join the class.

Rudraksh feels annoyed thinking that he can't do anything right while Preesha comforts him by teaching him the technique correctly.

Later, Rudraksh takes Preesha on a romantic date but she doesn't get impressed saying that it is nothing new.

They return home to see Sharda changing the mattresses while she reveals that Revati complained about having bedbugs.

Preesha thinks that Revati is planning something and goes towards the stairs when she suddenly slips on the oil fell on the floor.

However, Revati suddenly throws the mattress near Preesha and saves her from slamming into the ground.

Rudraksh thanks Revati for again saving Preesha and the child after which he takes Preesha to her room to rest.

Meanwhile, Revati takes Preesha's phone and thinks about how her plan fell right into place.

Later, Revati returns the phone to Rudraksh and manipulates him into convincing Preesha to not attend the concert.

Afterward, all the family members go to the concert while Preesha stays at home.

Preesha gets a call from Armaan who requests her to come to the Regency hotel to calm Anvi as she has learned about his cancer and she agrees.

Later, at the concert, Revati praises Rudraksh while he keeps calling Preesha but doesn't get a response.

Revati acts as calming him and tells him that she had secretly put a tracking device on Preesha's phone as a safety precaution.

Further, she tells Rudraksh that Preesha is at the Regency hotel and persuades him to go there and check which she also comes there.

She further tells Rudraksh to call Preesha again and put it on speaker after which she tells him that Preesha has blocked him.

Flashback shows, Revati blocking Rudraksh on Preesha's phone and putting a tracking device on it.

© Copyright tellybest.com, 2020, 2021. All Rights Reserved. Unauthorized use and/or duplication of any material from tellybest.com without written permission is strictly prohibited.
Cached Saved on: Monday 3rd of October 2022 03:24:40 AMCached Disp on: Friday 7th of October 2022 09:52:10 PM