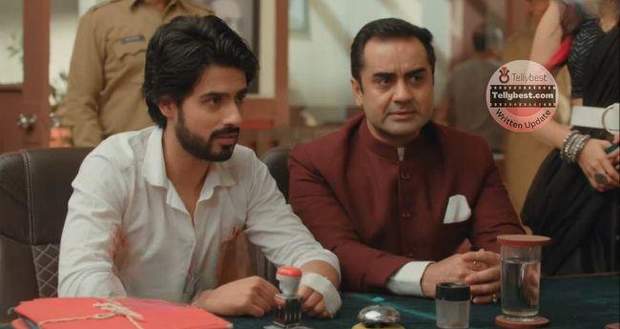 Today's Yeh Hai Chahatein 8th December 2022 episode starts with everyone forcefully entering Armaan’s room and finding Arman lying on the floor and covered in his own blood.

The police check him and declare that Arman is dead, and speculates that it was Preesha's doing as she is nowhere to be found.

Rudra, Pihu, Vidyuth, and Digvijay leave the room as the police instructed and discuss who could have done such a deed.

Meanwhile, the police investigate and find Preesha lying unconscious on the floor hearing this Rudra rushes in and tries to hold Preesha but the police are adamant about not letting him even close to her.

The woman inspector pours some water on Preesha’s face and she fidgets a little, Rudra and Pihu rush to pick her up and they put her on a chair.

Unaware of the whole situation, Preesha tells that her head feels heavy and when she came here to Armaan’s room he was fine.

The police inform her that Armaan has been murdered and with questioning eyes on her asks why she was there last night.

Seeing everyone in doubt Preesha tells the officer that Armaan knocked her with a vase that rendered her unconscious.

These statements made no sense to the officer so he asks for clarification.

Preesha starts to tell everyone whatever happened last night, as Rudra left she was on her way to tell Pihu that she is leaving.

At the same time, Dinesh kaka pulled her into a corner and told her that he is very sorry for whatever happened and he gave her proof that the constable at the Police station has frequented here a lot.

Seeing that photo, Preesha understood that the constable was teaming with Armaan for some money.

Preesha recorded and told him that a constable living in such luxury will get really famous in the media.

Then Nirmesh asked her to stop recording and only then will he tell the truth while Preesha acts as if she did stop the recording and he spilled all the beans.

Preesha recorded all the truth about how her signatures were used as parole permits, and how a substitute was implanted in Armaan’s cell.

Afterward, she decided to visit Armaan and humiliate him and tell him that he is done for, the inspector tells her that she did a mistake coming here.

She tells that she was very enraged so she entered his room even though the servants tried to stop her.

Preesha tells Armaan that she has proof that he is guilty and showed him that video where Nirmesh confessed everything.

Armaan tried to snatch the phone from her and hit her head with the vase then he deleted the video.

Presently, the inspector asks for the video and Preesha tells that she has a safe copy in Rudra’s phone.

So Rudra checks his phone and shows the video to the inspector.

Seeing the video the inspectors say that Preesha is still the prime suspect in Armaan’s murder.

© Copyright tellybest.com, 2022, 2023. All Rights Reserved. Unauthorized use and/or duplication of any material from tellybest.com without written permission is strictly prohibited.
Cached Saved on: Wednesday 25th of January 2023 08:23:37 PMCached Disp on: Sunday 5th of February 2023 04:21:00 AM