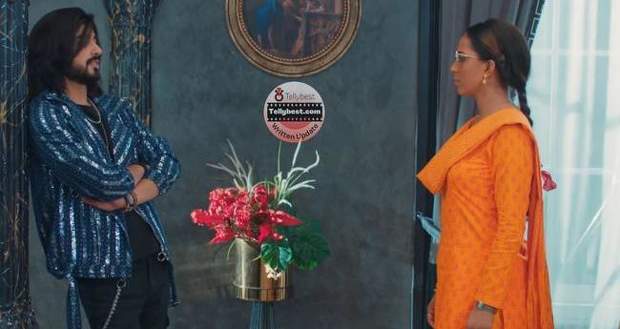 Today's Yeh Hai Chahatein 8th January 2023 episode starts with Samrat dragging Nayan to the side and shouting at her saying that she is the reason for Aliya being in jail.

Nayan argues with Sam and tells him that he should be thanking her since she saved Aliya.

They both point at each other's flaws while Sam continues to shout at Nayan and grabs her neck saying that he will kill her for torturing Aliya.

All this while, the media continues to record the whole interaction between Sam and Nayan.

However, Mohit and Ishaani come there and separate Sam from Nayan.

Sam instead starts fighting with Mohit while Nayan leaves with Ishaani.

Sam blames Mohit for not being there for Aliya while Mohit argues that he reached the party late.

In the morning, Mohit brings the bail for Alia while Sam tells him to book the tickets for London.

However, the police officer informs them that they cannot go out of India until the case is closed.

Sam tries to feed Aliyaa and asks her why she overdosed and she cries as she reveals that Mohit broke up with her and that he loves that Simpleton Nayan.

Sam gets furious and says that Nayan will see his anger from now on.

Back at Nayan's house, Malti is happy since she has to go meet with a family of a prospective groom for Nayan while Chintu comes there and complains about the TV not working.

Nayan recalls seeing the news in the newspaper about her fight with Sam the previous and removing the cable wire so that the family does not see the news.

She sees off her Amma while hoping that the news goes away by the next day.

On the other hand, Sam goes to Mohit and confronts him about him being in love with the matchmaker's daughter.

Mohit gets shocked as he thinks that Sam is talking about Ishaani and continues to lie to Sam that he has no one and broke up with Aliya for their own good.

Sam knows that Mohit is lying but thinks to play Mohit's game and agrees with him.

Sam acts of agreeing and leaves after telling Mohit that he will explain to Alia.

As Mohit closes the door, he thinks that he and Ishaani have to leave the country immediately and calls to book the tickets.

Elsewhere, Malti talks to Patti and tells her that Rahul's family has accepted Nayan's proposal.

However, just then they hear Nayan's name through the TV and get shocked to see the news about Nayan and Sam.

Malti cries and falls unconscious while Patti cries for the people to help and call an ambulance.

© Copyright tellybest.com, 2022, 2023. All Rights Reserved. Unauthorized use and/or duplication of any material from tellybest.com without written permission is strictly prohibited.
Cached Saved on: Wednesday 25th of January 2023 11:17:06 AMCached Disp on: Monday 6th of February 2023 05:19:59 AM