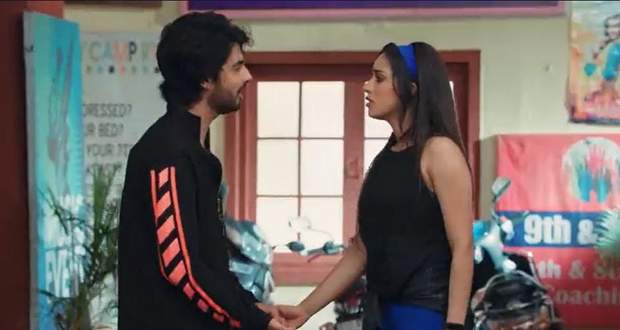 Armaan calls Preesha and tells her that Anvi has slept now but he is very scared as she knows that he will die soon.

Preesha says she will come back later when Anvi wakes up.

Becoming overemotional, Armaan hugs Preesha as Rudra shows up at the same time along with Revthi.

Rudra gets so mad seeing Armaan hug Preesha that he beats him up.

Preesha tries to stop Rudra but he keeps punching Armaan until she yells that Armaan is dying.

Before leaving the hotel, Rudra threatens Armaan one last time and punches his car angrily.

When Revthi tries to meddle in between RuSha’s fight, Preesha tells her clearly to not speak between a husband and a wife.

As Rudra angrily speaks to Preesha on the road, many people stare at him as he asks Preesha why she blocked him.

RuSha gets home with Revthi feeling happy to see both of them fight like cats and dogs.

Rudra is furious at Preesha for meeting Armaan as he has tried to separate RuSha before.

However, Preesha tells Rudra that Armaan only called her because he is dying and he wants her to take care of Anvi after he is gone.

Preesha also scolds Revthi for putting a tracker in her phone and almost tells Rudra about Revthi’s duplicity but Revthi fake-cries to gain Rudra’s sympathy.

As RuSha fight in their room, Preesha suddenly feels her baby kick in the stomach.

She tells Rudra and his mood changes instantly.

He calms down and asks Preesha to scream at him again so he can feel his baby too.

Preesha laughs at Rudra’s childishness as she screams at him and the baby kicks again.

Rudra feels sorry for his behaviour and tells Preesha that Armaan’s intentions can never be good but Preesha believes that people can change.

However, Preesha is also doubtful why Armaan hugged her suddenly because it seriously felt like a 'batameezi'.

The next day, RuSha is again happy and feeds each other food as Revthi feels disappointed to see them happy again.