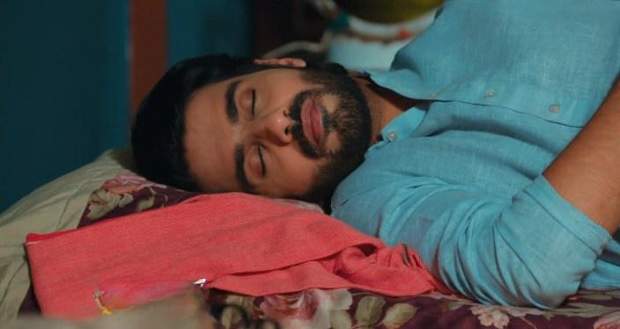 At first, Rudra gets disappointed that Preesha did not apply balm on his back herself but is glad for the massage.

Rudra returns to his room and tells God that he is taking a full test of Rudra since he is not used to the laborious work.

Just then, Rudra hears a knock on his door and when he opens it, his happiness knows no bounds.

It is Roohi who has come to meet Rudra and tells him she missed him so much.

Rudra picks up his little girl in his arms and tells her he missed her back.

Roohi gets sad when she sees a little blood ooze out of Rudra's hand but Rudra says the blood is nothing if he gets to be closer to Preesha.

Meanwhile, Pihu and Raj practice singing together with Vidyut watching them secretly.

Raj compliments Pihu on her singing but Pihu feels something is missing.

Vidyut comes into the room and advises them to dance, making Pihu agree.

However, Raj makes it clear that he doesn't know how to dance and asks Vidyut about his intentions.

Vidyut smiles and says he will happy to see Raj win the singing competition since he is Rudra's student and both the brothers hug each other.

On the other hand, Arman returns home and sees Rudra's car parked outside.

He asks the guard whether Rudra came into the house but the guard says Roohi baby came.

This makes Arman angry and he asks his staff to search the entire house for Roohi.

Preesha gets worried for Roohi since she didn't come to see Preesha.

When Roohi is not found, Arman knocks on Prem Maali's room and asks him to open it.

Rudra gets alert and quickly asks Roohi to exit via the window and opens the door after he has put on his wig.

Arman asks where is Roohi but Rudra pretends he doesn't who Roohi is.

Instead, Rudra even jumps into Arman's lap, asking him to protect him from the big black rat.

Getting irritated, Arman searches Rudra's room but doesn't find anyone.

© Copyright tellybest.com, 2020, 2021. All Rights Reserved. Unauthorized use and/or duplication of any material from tellybest.com without written permission is strictly prohibited.
Cached Saved on: Tuesday 9th of August 2022 08:28:15 AMCached Disp on: Sunday 14th of August 2022 11:41:50 AM