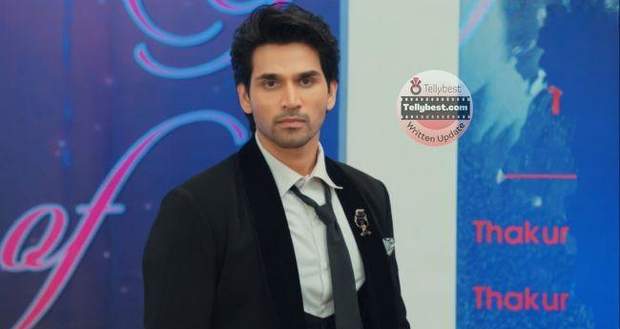 Today's Yeh Hai Chahatein 9th December 2022 episode starts with the police inspector speculating that Preesha might have lost her temper and then killed Arman.

Rudra butts in to defend Preesha but the Police inspector further speculates that maybe Ruudra was involved in this.

A little while later, Mr. Malhotra arrives at Arman’s house and tells the Police inspector about the last night’s party where Rudra openly said that he would take Arman’s life.

Hearing this the Police inspector says that Rudra and Preesha are the suspects in Armaan’s murder and will be arrested.

Rudra and Preesha continuously try to defend themselves but the Police inspector denies it and says that they have to leave with the Police.

Meanwhile, Sharda gets worried and calls Rudra but gets no answer so Ruhi asks her to call Pihu instead.

Outside the police station, Pihu gets the call from Sharda and she begins to tell her whatever happened at Armans’.

Sharda starts to panic and tells Pihu that her Rudra and Preesha will never do such a thing even if it’s to a devil-like Armaan.

Pihu understands that Sharda is worrying for Rudra and Preesha and tells her that she will take care of it and bring them home.

At the same time, Ruhi and Saaransh question Sharda and she tells them what happened.

Ruhi and Saaransh leave the house and look at the news. Ruhi tells Saaransh that they should tell the truth about the particular night.

Meanwhile, at the station, the police inspector interrogates Rudra vigorously and tells Rudra to keep his attitude in check.

Pihu tells the inspector that Rudra can’t kill anyone and the same for Preesha too.

The inspector says that they need proof and not some statements.

Suddenly, the auto driver comes into the station and tells that he was with Rudra all night long.

The police ask to bring Rudra so that he can identify the auto driver, Rudra affirms that he was the driver yesterday.

Afterward, he reveals that they both had bhaji pav and then he dropped Rudra at his house and all this was captured on CCTV.

The footage proves Rudra’s innocence but not Preesha’s says the inspector and he further says that Preesha will have to stay and face interrogations.

Later, Rudra meets Preesha in her cell, and they both come to the conclusion that the killer was a known person and was quick in doing his work.

Then, Preesha is taken to her cell, and Rudra comes home from the station.

Sharda, Ruhi, and Saaransh ask about Preesha and worries when will she come back again.

Rudra calms them down and Ruhi and Saaransh leave the house again.

Ruhi tells Saaransh that they should tell the truth.

© Copyright tellybest.com, 2022, 2023. All Rights Reserved. Unauthorized use and/or duplication of any material from tellybest.com without written permission is strictly prohibited.
Cached Saved on: Wednesday 25th of January 2023 06:57:59 PMCached Disp on: Monday 6th of February 2023 01:49:55 AM