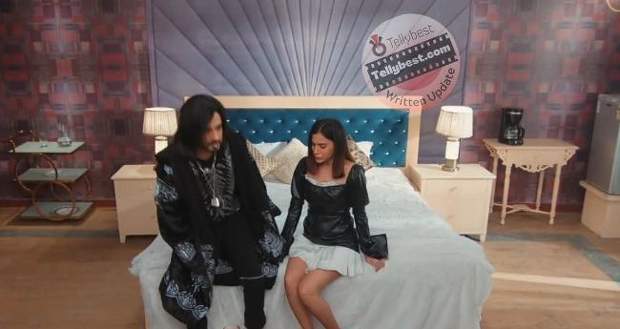 Today's Yeh Hai Chahatein 9th January 2023 episode starts with Mohit telling Ishaani that they have to leave for Australia immediately.

Ishaani asks Jim the reason for it while Mohit holds her hand and tells her that Sam's anger is uncontrollable and reveals to her that Sam was even ready to kill him when he first learned about the breakup.

Ishaani finally agrees and tells him that she will pack her bags but he stops her saying that he does not trust Aliya and Sam.

Later, Mohit messages the agent and goes to shower while Sam enters the room and checks the luggage bag.

He thinks that he knew Mohit was lying and gets the message from the agent about Mohit and Miss. Iyer's ticket is being booked.

This further confirms his misunderstanding that Mohit has dumped Aliya because of Nayan.

Meanwhile, in the hospital, the doctor tells Nayan that Malti is refusing to eat the medications which can even kill her since has had a very serious attack.

Nayan says that she will convince Malti and goes inside with the rest of the family.

Malti cries about no one marrying Nayan after the news while Patti informs her that Rahul and his family are willingly agreeing to make Nayan their daughter-in-law.

Patti tells them that Rahul has also agreed to marry in a group marriage which is happening at 3 in the afternoon.

Nayan argues that she wants to meet Rahul at least once before marriage.

However, Patti and Malti emotionally blackmail Nayan into agreeing.

Later, Sam comes to Iyer house and lights it on fire while the neighbors rush to put it out.

The ladies talk about the Iyer family's misfortune while another lady informs them about Nayan's marriage.

Sam thinks that Nayan and Mohit are getting married and rushes to the place where the group marriage is happening.

Meanwhile, at the marriage hall, Nayan meets Rahul who tells her that he was impressed by Patti and Malti's talks about her and reveals that he knows about her rejections cause of her dark skin tone but does not care since what matters is inside a person's heart.

Nayan feels relieved while Rahul jokes to lighten the atmosphere.

Just then, Ishaani calls Nayan and informs her that she is leaving India and going to Australia with Mohit since Sam has figured out about them being in love.

Nayan thinks that it is right knowing Sam's anger and tells Ishaani to take care while hiding the truth about Malti being in the hospital or her getting married to Rahul.

Further, as she is going towards the Mandap, she bumps into Sam and her glasses fall which breaks again.

Sam looks at the glasses and realizes that the girl is Nayan since those are the glasses that he gifted her.

© Copyright tellybest.com, 2022, 2023. All Rights Reserved. Unauthorized use and/or duplication of any material from tellybest.com without written permission is strictly prohibited.
Cached Saved on: Wednesday 25th of January 2023 05:46:56 PMCached Disp on: Sunday 5th of February 2023 04:33:57 AM