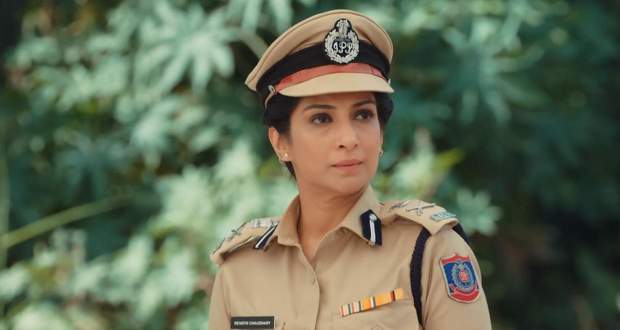 Today's Yeh Hai Chahatein 9th May 2022 episode starts with Revati arresting Preesha and Rudraksh for questioning while their lawyer assures them that he will release them as soon as possible.

The media questions Rudraksh and Preesha as the police are taking him away.

At the Khurana house, Roohi and Saaransh get shocked to see their parents arrested in the news and worry for them.

Sharda returns home and consoles the kids while Saaransh notices the police coming and informs her about it.

The police inspector announces that they have orders to bring Sharda and the kids to the police station for questioning.

At the police station, Preesha talks to Rudraksh in panic while he stops her saying that Revati might be hearing their conversation.

Outside the interrogation room, Revati says that Rudraksh is smart but he will never anticipate her next move.

Just then, Sharda and the kids enter the interrogation room while Rudraksh gets furious seeing his kids there.

Rudraksh argues with Revati while she reveals that she will interrogate each one of them separately to see if their answers match or not.

Later, Revati questions Roohi but she says that they didn't reach the terrace as she had slipped and injured herself.

Flashback shows, Rudraksh sitting with the Khurana family and telling them that they have to stick to the same story if they ever get interrogated.

Back in the present, Revati questions the Khurana family but gets confused hearing all of them say the same story.

Later, Revati feels frustrated while the inspector tells her that their story seems plausible and that Revati might be looking too much into Dev's death.

Revati goes to her office where Rakesh berates her for not arresting the Khurana but she stops him saying that she will find out the truth.

Rudraksh gets taken into a room where the police thrash him while Revati makes the rest of the Khurana family watch him get beaten.

The Khurana family cries for Rudraksh while Revati demands them to reveal the truth to save Rudraksh.

Not being able to see her father get thrashed, Roohi announces that she will tell Revati the truth.