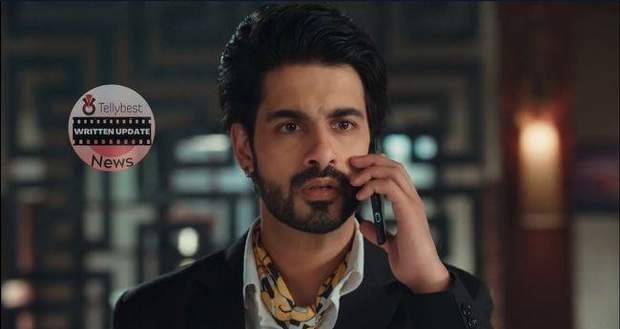 Today's Yeh Hai Chahatein 9th November 2022 episode starts with Saaransh telling Rudra who could be those goons who kidnapped Preesha.

Rudra tells Saaransh that every piece of evidence speaks against Preesha, so if she is not the culprit, who is?

Saaransh says he doesn't know who is the culprit but he believes Preesha a hundred per cent.

Meanwhile, Digvijay asks Pihu if she is feeling it all right now.

Pihu says yes while Digvijay speaks of not being able to believe that Preesha can pull off this kidnapping.

Pihu states that it was not Preesha but her who made this kidnapping plan.

Digvijay gets shocked as Pihu tells him she wanted Rudra & Sharda to suspect each other & every little action of Preesha.

Even the doll & the Scorpio was Pihu's idea as she narrates how she planned everything.

In the flashback, Pihu can be seen bribing Shamu (servant) to stuff the bouquet of flowers with a scorpion.

She is then seen talking to a bunch of goons, asking them to kidnap her.

However, they kidnap Preesha instead of her and order Rudra to bring money.

Fearing that she will be exposed soon, Pihu reaches the godown and first slaps the goon for kidnapping the wrong person.

She then asks them to lock her in a jar to force Rudra to save her first.

The flashback ends while Pihu asks how come Preesha was wearing a yellow saree which led to the kidnapping confusion.

Digvijay answers that it was Arman who ruined Preesha's prior saree.

Pihu also reveals the drama of fainting at the car since Rudra had caught Dinesh who could utter the truth in front of the police.

Pihu looks at Digvijay and asks him if he will support her in this and he readily agrees.

Pihu then asks him to make the wedding arrangements fast since she doesn't want to give Rudra to think about Preesha anymore.

Similarly, Ruhi goes to Saaransh and tells him that Rudra and Pihu will get married soon.

She speaks her heart out to her brother, saying she cannot see Rudra & Preesha apart and they have to do something to stop this marriage.

Saaransh promises Ruhi to do something while she cheers to make RuSha's 'batti' (patch-up) happen.

© Copyright tellybest.com, 2022, 2023. All Rights Reserved. Unauthorized use and/or duplication of any material from tellybest.com without written permission is strictly prohibited.
Cached Saved on: Monday 21st of November 2022 08:06:34 AMCached Disp on: Wednesday 7th of December 2022 02:43:21 PM