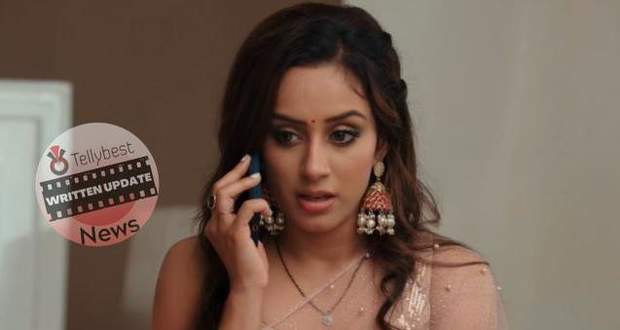 Today's Yeh Hai Chahatein 9th October 2022 episode starts with Rudraksh knocking on Saachi's (the lady who is helping Armaan) room while she gets shocked to see him.

She tells him to leave there while Rudra tells her to tell him the truth or else he will file a complaint against her to the police commissioner.

Saachi asks Rudra if he's alone and he nods as he recalls telling Preesha to stay in the car while he gets the job done.

Elsewhere, Pihu sings beautifully at the fundraiser while Vidyut imagines dancing with her and feels flustered at his imagination.

Everyone claps for Pihu while Vidyut thinks that he cannot imagine being with Pihu as she and Raj are together.

Back at Saachi's home, Rudra tells her that he knows how much she has helped Armaan and demands she reveal the truth with the threat that he will go to the commissioner with evidence against her.

She asks him what she has to do and Rudra tells her that she only has to go to the commissioner the next day and expose all of Armaan's wrongdoings.

Back at the fundraiser, Pihu is getting praised by her peers while Vidyut suddenly starts beating up a guy.

Pihu feels disgusted with him and stops him from beating up the guy comparing him to Raj and telling him that he will never be like Raj.

Vidyut leaves there angrily while Pihu helps the guy stand and gets shocked to see the provoking video that the guy had made of her.

Pihu slaps the guy and rebukes him after which she goes after Vidyut who is drinking while walking on the road.

She stops him and tells him about the video she saw on the guy's phone and tells Vidyut that he should have warned the guy and let him go.

Vidyut says that guys like him would never correct their problems.

Pihu asks him why he's helping her and if this is another one of his plans to humiliate her.

However, Vidyut pushes her up against the car and tells her that he did everything because he likes her.

He tells her that he tried to hate her by making her hate him but it didn't work as he sees her with Raj and feels even more jealous.

Vidhyut apologizes to Pihu and asks for her answer when her friends come there and take her away unknown to the tension between the two.

The next morning, Rudra is waiting for Saachi at the commissioner's office while telling him about the wrongdoings that Armaan has done.

Meanwhile, at the Thakur house, Preesha knocks on Armaan's door as it is locked and asks him and Digvijay why they locked the door.

However, Armaan says that he was just talking about some confidential business and tells her to leave the room.

Later, Digvijay leaves the house with an envelope while Preesha follows him to see Digvijay giving the money to Saachi and telling her to get off the grid.

Just then, Preesha gets a call from Rudraksh telling her that Saachi has escaped while Preesha says that she knows where Saachi is.

© Copyright tellybest.com, 2022, 2023. All Rights Reserved. Unauthorized use and/or duplication of any material from tellybest.com without written permission is strictly prohibited.
Cached Saved on: Monday 21st of November 2022 06:07:36 AMCached Disp on: Tuesday 29th of November 2022 12:13:48 AM