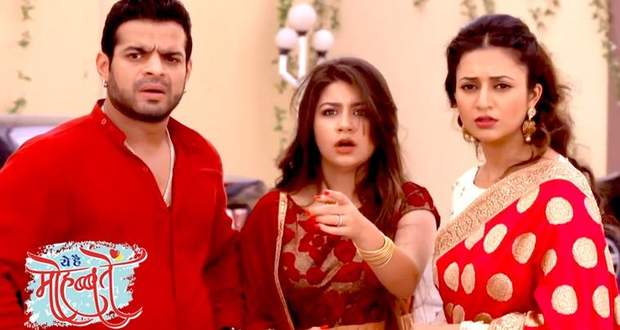 Today's YHM 2 May episode starts with Rohan telling Ruhi and others about Ishita. Ruhi tells Rohan and Karan about Shaina Shah. They get tensed about Ishita.

Raman and others come to the place instructed by Rohan. Sahil and Shamshad get tensed seeing Raman there.

Shamshad advises Sahil to leave Shaina alone in the house. Sahil cracks a plan to fool Raman. He asks Shaina to enact as Ishita in front of Bhallas.

Raman finds Ishita aka Shaina stranded in a chair. Raman and Bala question Ishita about Sahil and his men. Raman takes Ishita along with him.

Sahil celebrates the success of his plan. On the other hand, Bhalla family gets happy on the return of Ishita in the house.

Ishita calls Sahil secretly about everything in the Bhalla house. Ishita hides the camera and talks to herself that she is Shaina and Ishita both.

She feels bad for cheating her family. Ishita breaks down in tears in front of Raman. Raman says he will always protect her.

Ishita narrates that Sahil blackmailed her by saying that he will frame Ruhi in the bomb blast case if she will not support him.

She explained everything to Raman. Raman gets shocked.