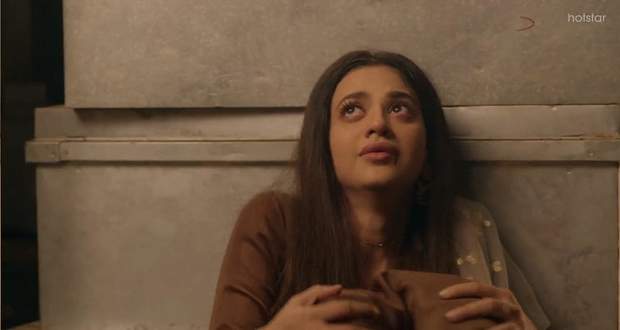 Today's Yeh Jaadu Hai Jinn Ka 15 Aug episode starts with Rehan’s family taking care of Shayari after she fell unconscious. Shayari thinks that she must say thanks to Rehan for his help.

Shayari goes to Rehan and apologizes to him for her mistake but Rehan rudely says her that he is not at all interested to talk to her. He informs her that he has paid six months' salary in advance to her family. Shayari tells him that she will always be indebted to him.

Rehan orders her to collect the consignment of carpets from the warehouse and warns her that he can take back the six months advanced salary any day.

Shayari leave alone at the night time to fetch the carpets, whereas Rehan makes a call to Khanna and inform him about the order he gave to Shayari out of anger.

Rehan asks him to go and help Shayari but Khanna couldn’t hear him as his phone fell from his hand at that time.

Shayari asks some strangers about the warehouse nearby but instead, they try to harass her which makes Shayari run from there to save herself.

Shayari tries to call Rehan for help but he doesn’t pick the call, while Rehan tells Roshni about the promises he made with Farhaan.

Roshni gives him an idea to get engaged in front of the media so that Farhaan would come back to stop Rehan’s marriage as per his promise.

Later, Rehan proposes Natasha to marry him and asks her to get engaged with him on the following day. Natasha accepts his proposal, while Roshni asks Rehan to check on Shayari as she got many missed calls from her.

Rehan leaves to help Shayari, whereas Shayari attacks the culprits with glass bottles. Rehan reaches there and gets Shayari out of danger.

Upcoming Yeh Jaadu Hai Jinn Ka episode update: Taabizi informs Roshni that if she will break her promise made with the Jinn then Aman's life would be in danger.