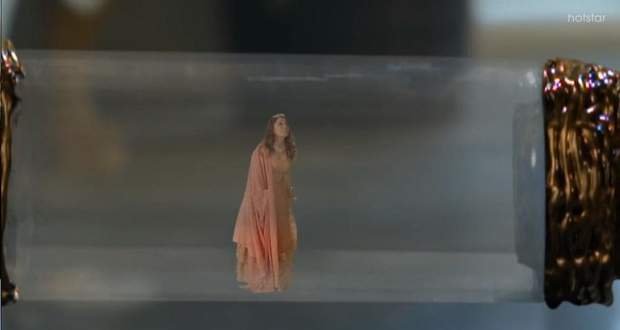 Today's Yeh Jaadu Hai Jinn Ka 19 Aug episode starts with Aman asking Rehan if he is sure about his relationship with Natasha. Rehan tells Aman that he is going to do the engagement just to bring back Farhaan.

Aman informs the media that he is going to make two major announcements, while Natasha asks Shayari that what she was doing in her room.

Natasha accidentally traps herself in a magical bottle. She calls Shayari for help but Shayari couldn’t see Natasha and runs away from there.

Aman asks Roshni to come for the interview, whereas Roshni doesn’t want to disclose her pregnancy.

Aman tells the media about the new person’s arrival in their house, but Roshni interrupts and says Mahira’s name. She tells everyone that Mahira is Rehan’s sister and she is the new member in their house.

Aman questions Roshni for not letting him announce the arrival of their baby. Roshni tells him that pregnancy news should not be revealed so early.

Taabizi tells Aman that she asked Roshni to not let the news out as it’s her first pregnancy and it doesn’t take much time to get evil eyes on such a joyful moment.

Mahira informs everyone that she couldn’t find Natasha anywhere, whereas Natasha decides to jump from the first floor along with the bottle so that she can get free after breaking the glass of the bottle.

The media starts questioning the Khan family about Natasha’s absence and Aman starts feeling something fishy.

© Copyright tellybest.com, 2022, 2023. All Rights Reserved. Unauthorized use and/or duplication of any material from tellybest.com without written permission is strictly prohibited.
Cached Saved on: Wednesday 25th of January 2023 11:39:29 AMCached Disp on: Monday 6th of February 2023 01:59:58 AM