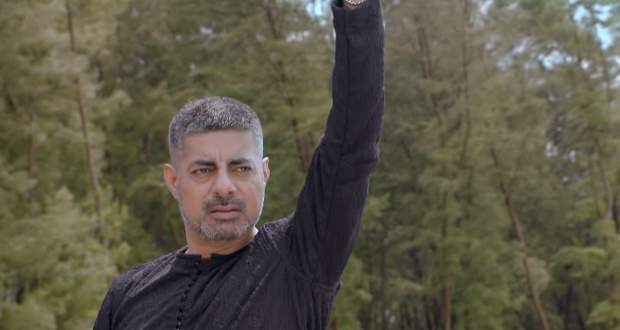 Today's Yeh Jaadu Hai Jinn Ka 27 Mar episode starts with Junaid Khan throwing Rubina and Farah out of the house. Rubina is left crying on the road and is guilty about her decision.

Later, Daadi learns from the manager that Junaid went to the Jinn and promised to give his firstborn to him after he gets rich. She also learns that Junaid gave away Roshni and threw Rubina out of the house.

Junaid was going to give Aman to Jinn but Daadi and Ammi were out to save Aman. Junaid reaches the other end and invites the Jinn. The Jinn is about to take Aman when Parveen fires bullet on Junaid.

Junaid struggles to stay alive while Daadi’s bullets have no effect on Jinn. Rubina arrives and fires from her special gun and the Jinn disappears.

Rubina says only bullets made of rust and gold have an effect on Jinn. Later, Junaid accepts his crimes while dying and Daadi cries for her son.

Parveen, Phui, and Daadi bury the body of Junaid and Daadi doesn’t want anyone to know about the truth of Junaid’s murder. They further witness some magical leaves disappearing in the air.