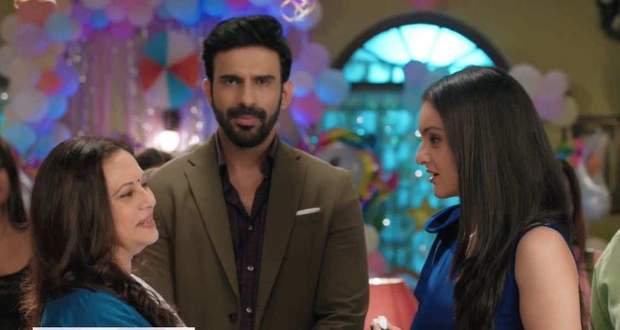 Today's Yeh Jhuki Jhuki Si Nazar 11th April 2022 episode starts with Armaan leaving Diya's office while Diya stops him and says she has never felt the same for someone else before.

Armaan says she should have at least tried speaking her heart out as he hints at his love for Diya.

Meanwhile, Diya receives a call while Armaan leaves in anger.

Later, Palki arrives with loads of gifts received by Sudha and Bhavna while Anju says the gifts are quite expensive.

Meanwhile, the Mathurs are excited about Palki's birthday while Diya bakes a cake for her sister Palki.

On the other hand, Anjali and Jayroop get emotional as Palki will be leaving soon after she gets married to Armaan.

Later, the Mathur's cut the cake and celebrate Palki's birthday.

On the other hand, Diya decides to plan a surprise for Palki and invites Armaan and Sudha.

Meanwhile, Armaan writes a letter for Diya to express his true feelings to Diya while Bhawna overhears his conversation with Krish and decides to do something about it.

On the other hand, Armaan writes about Diya and her qualities and how he gradually got to know her, making him fall in love with Diya.

Armaan smiles as he writes about the infinite memories they built together from their first meeting to their recent one and feels excited to give the letter to make Diya understand Armaan's love.