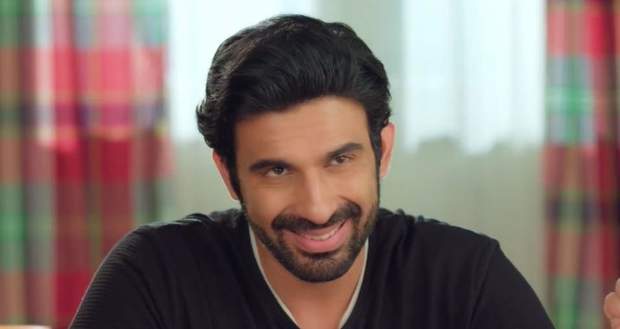 Today's Yeh Jhuki Jhuki Si Nazar 13th May 2022 episode starts with an infuriated Diya dragging Kajal out in the hall.

Diya confronts Kajal about saying, I love you to her husband Armaan.

Surprisingly, Kajal denies Diya's allegations but Diya states the facts as she witnessed the truth through her own eyes.

Later, Diya and Kajal's boss jump into their argument trying to blame Diya instead of Kajal.

The boss adds that Diya is insecure about her looks and her skin color and scared about losing Armaan to a much more beautiful woman like Kajal.

Infuriated to the heights of her anger, Diya slaps the boss in front of the staff and shuts him up.

Trying to show his bossy attitude, the boss tries to warn Diya and leaves.

Meanwhile, Bhavna calls Anju asking if Diya has arrived at the Mathur house.

Later, Anjali suggests Diya apologize to her boss and ignore the taunts about her skin color.

After some time, Armaan arrives at Diya's office and builds her strength to choose the right path.

Armaan motivates Diya to fight for her rights and shut down any negativity around her.

In order to pick up Diya's self-confidence and lift her strength, Armaan suggests Diya to choose the road less trodden.

Later, Diya keeps her foot forward and exposes her boss, Mr. Jaggi, how he discriminated against Diya on the basis of her skin color.

Jaggi murmurs again about her skin color and standard expecting an apology from Diya but gets another hard slap on the face.

Diya walks out of the room and resigns from the job walking with dignity and self-respect.

Later, Diya and Armaan walk out with pride and the staff watches them leave.

On the other hand, a video about an affair between Mr. Jaggi and Diya goes viral on social media which brings Diya in a negative light.

Madhu talks to her friends about how women these days don't have a good character who goes out of the house and work.

Later, Madhu takes a look at the video and finds Diya's face in it.