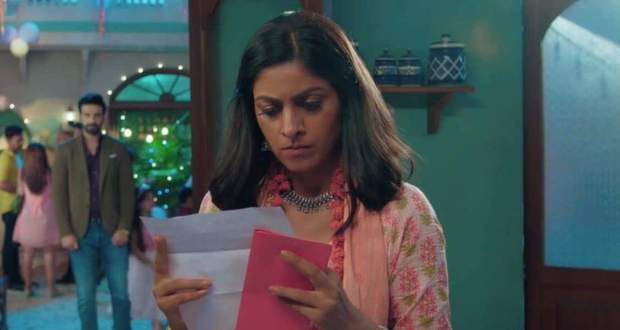 Meanwhile, Diya tries to hide her tears and hugs her sister Palki.

Armaan tries to look away and think of his life with Palki instead of Diya.

Later, Anjali brings Palki's gifts along with the letter written by Armaan for Diya.

Unfortunately, Jhanvi reads the love letter by Armaan and is in a dilemma if she should tell the truth to the family or not.

Later, Jhanvi decides to burn down the letter so that no one could read it and decides to keep the truth to herself in order to save Palki from heartbreak.

Meanwhile, at the Rastogis, Sudha decides to give Palki her traditional jewelry, but Bhavna comes to blabber.

Bhavna pesters Sudha to tell her the truth behind the sudden consent of Armaan after Palki's birthday party.

Later, Bhavna says she was the one who worked on getting a fair daughter-in-law for her.

Sudha disagrees and says she wants someone younger but Diya will find it difficult to adjust as she is old.

Bhavna taunts Sudha by calling her bossy and this is the main reason for getting someone younger who would be easy to boss around.

Later, Sudha says Bhavna should stay within her limits as she is the mother while she indicates Bhavna to live with her in-laws if her bossy attitude bothers Bhavna.

Meanwhile, Armaan visits the Mathurs to give the jewelry to Palki.

As he enters the Mathur house, Diya is standing in the front changing her earring while Palki asks for his opinion.

Armaan hints he liked the first one but his decisions are always wrong so he will go with his mother Sudha's decision.

Jhanvi clarifies and says, Armaan is talking about the earring and notices the tension between Armaan and Diya.

Palki explores Armaan's room while she finds Diya's picture in his closet and is shocked.

Later, Palki is relieved after she finds out it is a picture of Palki and Diya together.

The sisters have a little chat about their friendship and hug each other celebrating their togetherness.