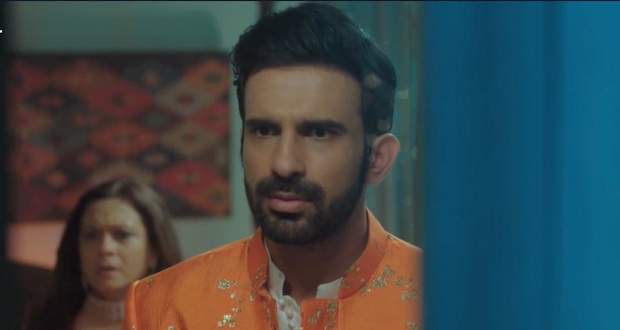 Today's Yeh Jhuki Jhuki Si Nazar 15th April 2022 episode starts with Sudha being busy in the preparations for the party when Bhavna comes in taunting Sudha for looking stressed.

Sudha tells her to go and gossip with Nimmy aunty as she always does.

Bhavna warns Sudha that she might say something bad to Nimmy then she should not blame her.

Seeing Palki stressed, Diya goes to get the earring fixed and collides with Arman on the way.

Arman comes to Sudha’s room telling her that he is confused about getting engaged to Palki.

Arman overhears them and feels betrayed.

Arman recalls the taunts that Diya and Palki have been sending his way and feels ashamed at the scenario.

Sudha tries to comfort him but Armaan tells her that he has never expected that his own mother can cheat him.

Arman asks Sudha how would he stop the engagement.

As Sudha tries to explain Arman, Palki comes in telling him that Diya is in danger.

Arman rushes to Diya’s help while Jhanvi comes to get Palki and tells Sudha that there is some riot at Chandani chowk where Diya has gone and they are also going there.

Diya is trying to save herself when Arman comes to her help. Just then a stone hits Diya’s head and she falls down.

Seeing Diya injured makes Arman break the barrier and goes in between the fight.

Diya’s family also comes in and tries to get to Diya but is stopped by the police.

Police are trying to control the mob while Arman reaches Diya and tries to wake her up.

Throwing water on Diya brings her to consciousness and she feels happy to see Armaan.

However, the police capture Arman and Diya but he is not ready to let go of Diya’s hand which everyone in their family witnesses.

Getting free of police hold both Arman and Diya hug each other while Palki and others look at them shockingly.

Arman gets scared of losing Diya and confesses his love for her whereas Palki stands stunned listening to Arman's confession of love for Diya.

© Copyright tellybest.com, 2020, 2021. All Rights Reserved. Unauthorized use and/or duplication of any material from tellybest.com without written permission is strictly prohibited.
Cached Saved on: Saturday 28th of May 2022 06:28:54 PM