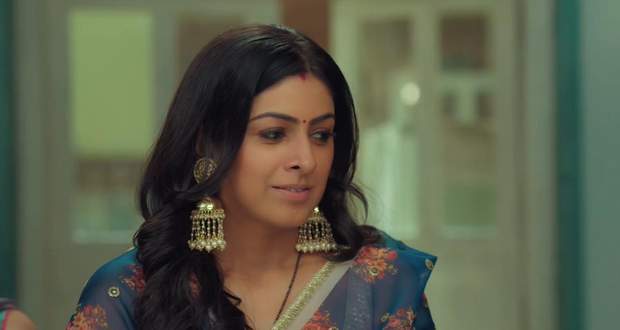 Today's Yeh Jhuki Jhuki Si Nazar 15th June 2022 episode starts with Sudha asking Armaan why he looks upset and is not sleeping in his room.

Armaan lies that he is waiting for a client’s call from the US.

As Sudha asks Armaan if she is worrying without a reason, Sudha feels pain in her stomach.

Armaan asks her how she is feeling as Sudha tells Armaan that the heavy food she ate after the kirtan did not suit her.

Armaan scolds Sudha, saying why does she eat such food when it doesn’t suit her.

Diya, Krish, Bhavna, Madhu, and Saloni all come to Sudha’s aid and bring different types of drinks to help with Sudha’s abdominal pain.

However, Sudha only takes the Ajwain drink made by Diya as Madhu takes the Lemon Soda made by Saloni to help with her digestion.

Meanwhile, Anjali calls Palki into her room as Palki lays down on the bed between Anjali and Brij, asking Brij to narrate a story so Palki can sleep.

Anjali informs Brij that Palki has gone to sleep as Brij feels grateful to have a wife like Anjali and two strong girls as his children.

Meanwhile, Diya tells Armaan that as Sudha’s health is important to him, so is Brij’s health to Diya.

He looks at Diya softly and tells her that he will be with her throughout the whole process.

However, Armaan asks Diya not to tell Sudha that they won’t be having a baby for the next two to three years as Diya’s body needs time to heal after the surgery.

Diya tells Armaan that she cannot lie to Sudha as Sudha’s hopes to become a grandmother are increasing day by day.

The next day, as Armaan showers in his bathroom, Saloni hands him a towel pretending to be Diya.

Meanwhile, Diya calls Anjali and tells her that she will be Brij’s donor as Anjali worries about Diya’s health.

Later, Bhavna asks a smiling Sudha what has made her mood so good.

Sudha tells Bhavna that ever since she got to know that Armaan and Diya went to a gynecologist, all she can see is kids around her everywhere.

Sudha is excited to be a grandmother as Bhavna reminds Sudha that the kid should be like Armaan.