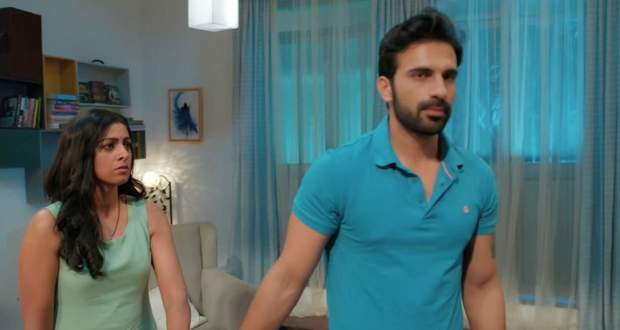 Today's Yeh Jhuki Jhuki Si Nazar 17th June 2022 episode starts with Armaan asking Sudha to forgive both him and Diya like an elder does to a child as elders often make children understand the point of things.

Sudha snaps at Armaan, saying he should be the one to make Diya understand as it is a matter of the heir of Rastogi House.

Madhu taunts Diya for making Armaan just like him as earlier he did not even use to lift his little finger without Sudha’s permission.

However, Diya cries and begs Sudha to let her go and donate her bone marrow to Brij.

Looking at Palki’s message on her phone, Diya tells Armaan that Brij is asking for the donor.

Krish tries to reason with Sudha, saying it is a matter of life and death for Brij uncle.

However, Madhu tells Krish to be a little ashamed of him for supporting Diya.

Before Krish can say anything else, Sudha tells Diya she is free to do anything since no one cares about Sudha as much as she does about others.

On the other hand, Brij asks Palki to make the donor meet him so he can say a thank you.

To lift Brij’s spirit until Diya shows up at the hospital, Palki convinces a nurse to pretend to be Brij’s donor.

Throwing an ultimatum at Diya, Sudha says if Diya steps out of the Rastogi House, she won’t be able to enter it again.

Armaan gets angry at Sudha as Diya reasons with Sudha, saying they might not be seeing eye to eye right now but Sudha is just like a mother to Diya.

Sudha is stubborn to have Armaan’s heir as her grandchild and not an adopted child as Diya’s body might not be fit for pregnancy post Brij’s surgery.

However, Armaan and Diya leave as Sudha locks herself in her room.

On the other hand, Bhavna starts to pack Diya’s bag according to Sudha’s condition for Diya but Madhu reminds Bhavna that it is not easy to kick out Diya.

Diya rests in Armaan’s heart deeply who will fight for her even with Sudha.