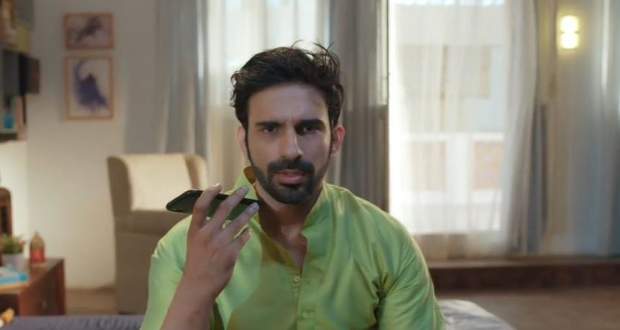 Today's Yeh Jhuki Jhuki Si Nazar 19th April 2022 episode starts with Krish asking Palki to think again as there is no going back from here.

Palki assures him and gives her phone to Krish which he hides under the book in the drawing-room.

Later, Diya reads Palki’s messages which are full of Krish’s text and their pictures together and is shocked to know about Palki and Krish.

On hearing Palki’s laughter, she goes in search of her.

However, Palki leaves while Krish explains to Diya that Palki has feelings for him and only wants to take revenge on Armaan.

However, after knowing Armaan's true feelings for Diya, Palki decides to play cupid between Diya and Armaan.

Krish also tells her that Armaan has already shared his feeling with her and now it's her turn.

Diya is remembering everything that has happened so far when Armaan comes in and looks at her lovingly.

After a while, Palki asks Sudha her reasons for calling Diya there.

Sudha is finding it difficult but asks Diya to marry Armaan in place of Palki.

She also confesses her love to Armaan which makes Armaan happy while everyone looks at them with mixed feelings.

In the kitchen, Bhavna tries to instigate Sudha who is still surprised at Diya’s approval.

However, Sudha tells Bhavna that she is happy if Armaan is happy and she should feel the same.

On the terrace, Diya is feeling happy after her confession while Armaan approaches her from behind looking equally happy.

Diya playfully tells Armaan that she is a tough nut to crack and that living with her will not be easy.

Armaan tells her that this is what he likes about her.

Coming close to Diya, Armaan tells Diya that he accepts her as she is and whispers her name to her while Diya feels his nearness and closes her eyes.

However, Armaan teases her while getting away with her.

Later, enfolding Diya in his arms again, Armaan asks Diya her reasons for changing her mind.

Diya tells him that she has come to know that Palki has no feelings for him and was planning to break the engagement in future, which surprises Armaan.