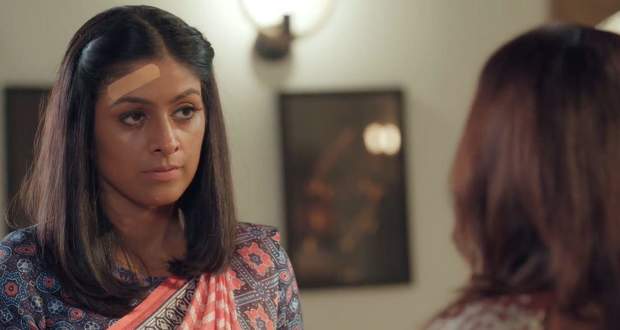 Today's Yeh Jhuki Jhuki Si Nazar 20th April 2022 episode starts with Diya telling Armaan that she won't leave him and is about to leave when he suddenly back hugs her.

Armaan asks her what was the reason for her accepting his proposal.

Diya reveals that she has found out about Palki not being serious about him and already having a boyfriend, Krish.

Anjali calls Diya and she goes while Armaan feels confused about Krish and Palki.

Armaan goes to Palki and Krish and interrogates them while Palki reveals that she didn't have any other choice as Diya wasn't listening to her.

Armaan realises that Palki is sacrificing him for Diya and asks her if he can hug her.

She hugs him but starts crying while she takes a promise from Armaan that he won't reveal her plan to Diya.

Later in the evening, Brij Mohan, Anjali and Palki are preparing the guest list when Diya comes there while on a call with Armaan.

Diya gets shy seeing the family's attention on her and disconnects the call after which she informs the family that she and Armaan want a simple wedding without guests and only their family.

Meanwhile, Armaan also tells Sudha that he and Diya want a simple wedding while Sudha denies saying what will she tell the relatives.

However, Armaan manages to convince her and further reveals that he and Diya want to marry the next day only.

Both the families agree and the preparations for Mehendi and Haldi ceremony begins.

At Armaan's house, Krish's mother gives the Haldi to him to send it to Diya's house while he puts it at a table and leaves to get the car keys.

Just then, Bhavna takes the bowl of Haldi from the table and goes to the kitchen while her husband interrupts her.

He tells Bhavna that her plan of making Palki Armaan's wife has failed while Bhavna recalls feeling insulted by Diya's words.

Bhavna ignores her husband and goes to the kitchen and adds itching powder to the Haldi.

© Copyright tellybest.com, 2020, 2021. All Rights Reserved. Unauthorized use and/or duplication of any material from tellybest.com without written permission is strictly prohibited.
Cached Saved on: Sunday 18th of September 2022 03:02:30 AMCached Disp on: Saturday 1st of October 2022 04:41:41 PM