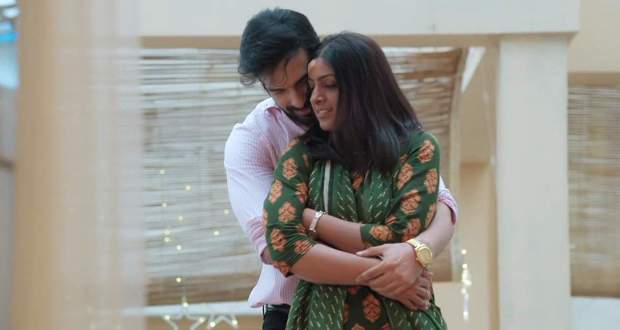 Meanwhile, Krish arrives at the Mathurs with the Haldi and tries to make Diya's video.

Later, Krish gets caught by Palki while she picks up Armaan's call and gives the phone to Diya.

Armaan talks to Diya with excitement while they both talk romantically.

Meanwhile, Nimmi and Diya get an allergic reaction from the Haldi while they are rushed to the hospital.

On the other hand, Bhavna tries to blame Ramkali and looks worried about her plan getting caught.

Meanwhile, Sudha calls Armaan and he asks Sudha to apologize to Diya.

On the other hand, Bhavna arrives and labels Armaan's wedding as a bland one without any spice and blast.

Sudha slaps Bhavna calling it would have been a bigger blast if Ramkali was not there to be blamed and Bhavna got caught instead.

Bhavna is shocked and feels exposed, Sudha says she has never apologized to anyone in her life but has to bow down because of Bhavna.

Sudha says she will do anything for Armaan's happiness while Bhavna tries to instigate Sudha.

Meanwhile, Sudha feels challenged and warns Bhavna not to do anything foolish.

Later, Armaan apologizes to Diya from his side and promises to protect Diya at all costs.

On the other hand, Armaan tries to interrogate Bhavna while Bhavna shivers with anxiety.

Later, Armaan asks Bhawna to swear on him and confess if she is not guilty.

Bhavna lies and swears on Armaan without any hesitation.

Further, Palki helps Diya to get ready for her big day while Diya glows with joy in her red bridal attire.

© Copyright tellybest.com, 2020, 2021. All Rights Reserved. Unauthorized use and/or duplication of any material from tellybest.com without written permission is strictly prohibited.
Cached Saved on: Sunday 2nd of October 2022 05:29:26 AM